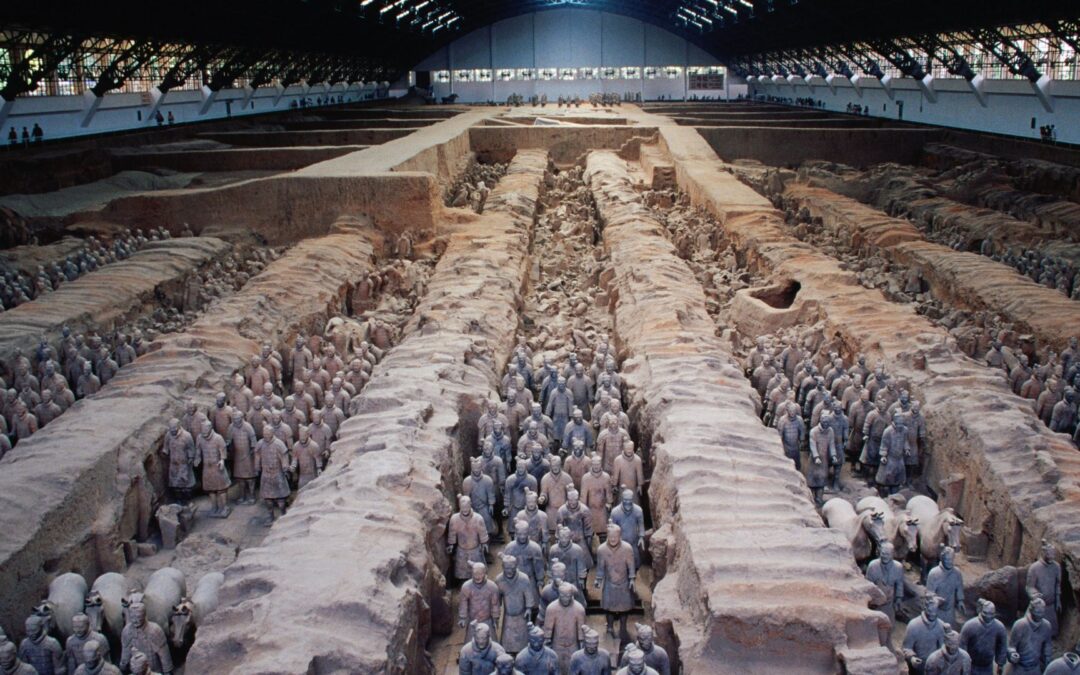 Early in its history, China was split into five independent and warring states until thirteen-year-old Zheng ascended the throne of the state of Qin in 246 B.C. Assuming the title Qin Shi Huang Di, or “First Emperor of the Qin,” he defeated the other states one by one and managed to solidify the country. What was achieved in his brief ten-year reign is extraordinary: the Great Wall of China was completed, weights and measures were standardized, the system of writing was unified, and a network of roads and canals was built. For all his achievements, however, Shi Huang Di was an autocrat and would brook no opposition to his total authority. Maleficent and suspicious, he had all texts on Confucianism burned and the scholars banished, buried alive, or beheaded.

The emperor was obsessed with the idea of death. Always fearful of some fatal disease, he engaged in a perpetual search for an elixir. Shi Huang Di began the construction of his tomb on the day that he took office. Although archaeologists have just begun to uncover the elaborate chambers beneath an earth mound called Mount Li, historians from the emperor’s time left vivid descriptions of buried wealth and sumptuous decoration. What there is no record of is an underground vault, which would be discovered in 1974 by Chinese peasants digging a well.

Excavation of the enormous underground chamber revealed 7,000 life-size terra-cotta warriors and their horses in battle formation- a whole clay army, interred as if to follow the emperor into immortality. Facing east, the vanguard consists of rows of crossbow and longbow bearers, followed by the main force of armored soldiers holding real metal spears and dagger axes. Surface treatment made the weapons resistant to rust and corrosion so that even after being buried for over 2,000 years, they are still functional. Thirty-five terra-cotta horse-drawn chariots bring up the rear of the emperor’s entourage.

Some of the astonishingly realistic figures are upright, intact, and seemingly poised for attack. Others lie smashed and scattered, the result of looting by soldiers from the succeeding reign. All of the faces on the pottery figures have distinctly different features, as if they were modeled after actual people; like real soldiers’ faces, they reflect everything from ferocity to confidence. The warriors wear tight-sleeved outer robes, short coats of painted chain-mail armor, and windproof caps, all fashioned from the clay. The sculpted horses, too, are richly detailed with curled forelocks and knotted tails.

The terra-cotta army of Shi Huang Di can be added to the accomplishments that made his reign a turning point in China’s history. Its magnificence remains undiminished, suggesting that the emperor may have found immortality after all.