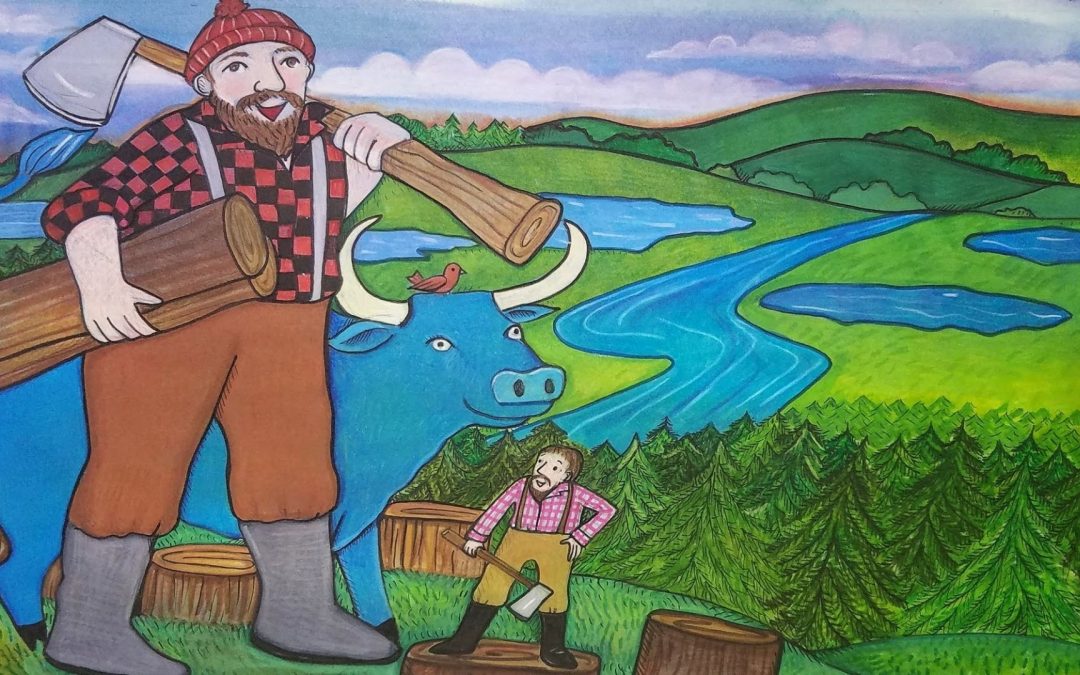 Paul Bunyan and the Tall Tale

There must be something about campfires that stimulates the storyteller in us. It was around frontier campfires that boredom and a sense of competition combined to create a proliferation of tall tales. Here were born such characters as Pecos Bill and John Henry. Even the actions of real human beings like Davy Crockett were enhanced with carefully contrived tales of unbelievable strength and courage. Perhaps the best-known character is Paul Bunyan, the logger.

Stories of Paul Bunyan’s size abound. One story claims that at birth a huge boat served as Paul’s cradle. The river gently rocked baby Paul to sleep, but when he rolled around in his bed, he created waves so large that people had to climb on their roofs to escape them. Another story recounts how Paul created the Grand Canyon by dragging his ax behind him as he walked across the plains.

The disparity between Paul and his surroundings occasionally caused some problems. He had to be constantly reminded not to step on houses or put his foot on a mountain to tie his shoe. In most of the stories of Paul Bunyan, he is accompanied by his famous blue ox named Babe. Like Paul, Babe was huge. Her size was a great advantage. Paul Bunyan could clear an entire forest in one morning. Before he had Babe, however, his work was impaired because he had no way to carry away the trees he cut down. Babe could carry all the trees in a forest on her back.

In one well-known tale, a serious water shortage occurred at a logging camp in North Dakota. Paul and Babe could not stand by impassively while men went thirsty, so Paul tied a big tank on Babe’s back and set out to get water from the Great Lakes. On their return trip, Babe’s hoofs made holes in the ground, and the water from the tank spilled into them. According to the story, this is how Minnesota came to have so many lakes. One addendum to the story concerns an accident that supposedly occurred midway through the journey. Babe tripped, and all of the water spilled out of the tank on her back. This spill was the start of the Mississippi River.