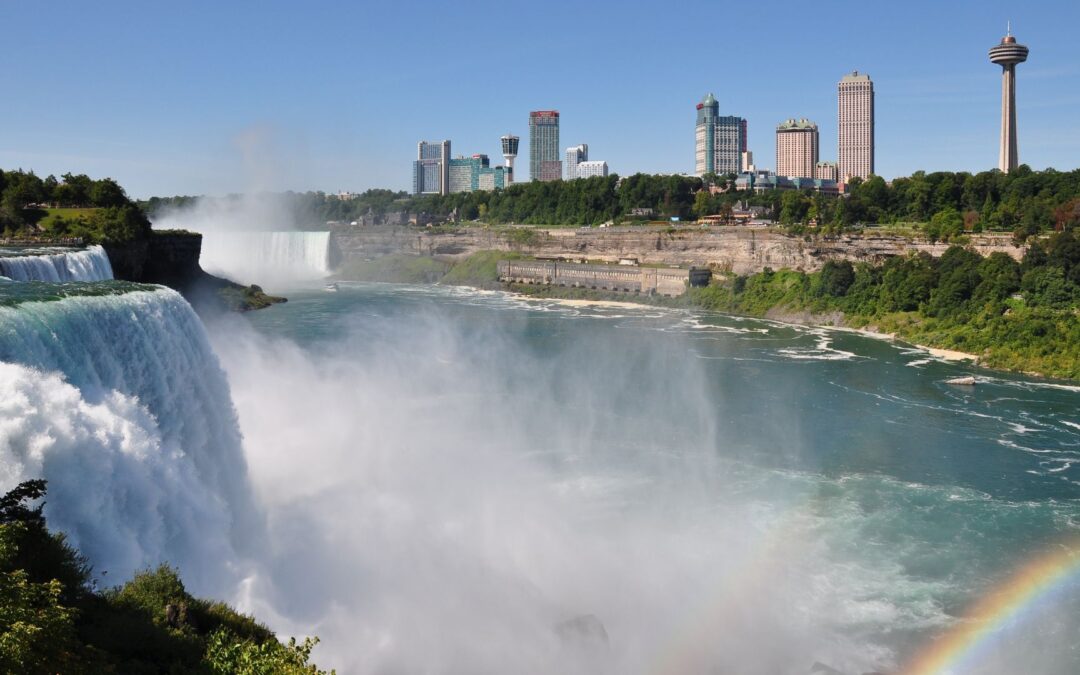 Other waterfalls are higher than Niagara Falls, but Niagara Falls is one of the most famous. Why? Because the great beauty and immense size of Niagara Falls make it one of North America’s most spectacular natural wonders!

WHERE IS NIAGARA FALLS?

Niagara Falls is actually two giant waterfalls and one smaller one. Goat Island, in New York state, lies between the two main falls.

One big waterfall, called American Falls, is on the U.S. side of the river. American Falls has a fairly straight edge. The waterfall is 1,075 feet (328 meters) wide and 182 feet (55 meters) high. A small part of American Falls, located near Goat Island, is called Bridal Veil Falls.

The biggest of the two giant waterfalls is in Canada and is known as the Canadian Falls. It’s also called the Horseshoe Falls because of its horseshoe shape. The curved edge of the Canadian Falls measures 2,200 feet (670 meters) wide, and the water drops 187 feet (57 meters). The Canadian Falls carries nine times more water than the American Falls!

Niagara Falls is a popular tourist attraction. Millions of people come each year to watch the spectacular waterfalls. You can take a boat trip to see the falls from below. You can also watch from observation decks above or beside the falls. You can even enter the Cave of the Winds, a path that takes you to the base of Bridal Veil Falls. Visitors must wear bright-yellow rain jackets to stay dry!

Niagara Falls makes an enormous, ground-shaking roar and a huge cloud of water mist. Rainbows shine through the mist. At night, the falls are lit with colored lights, creating a brilliant display!