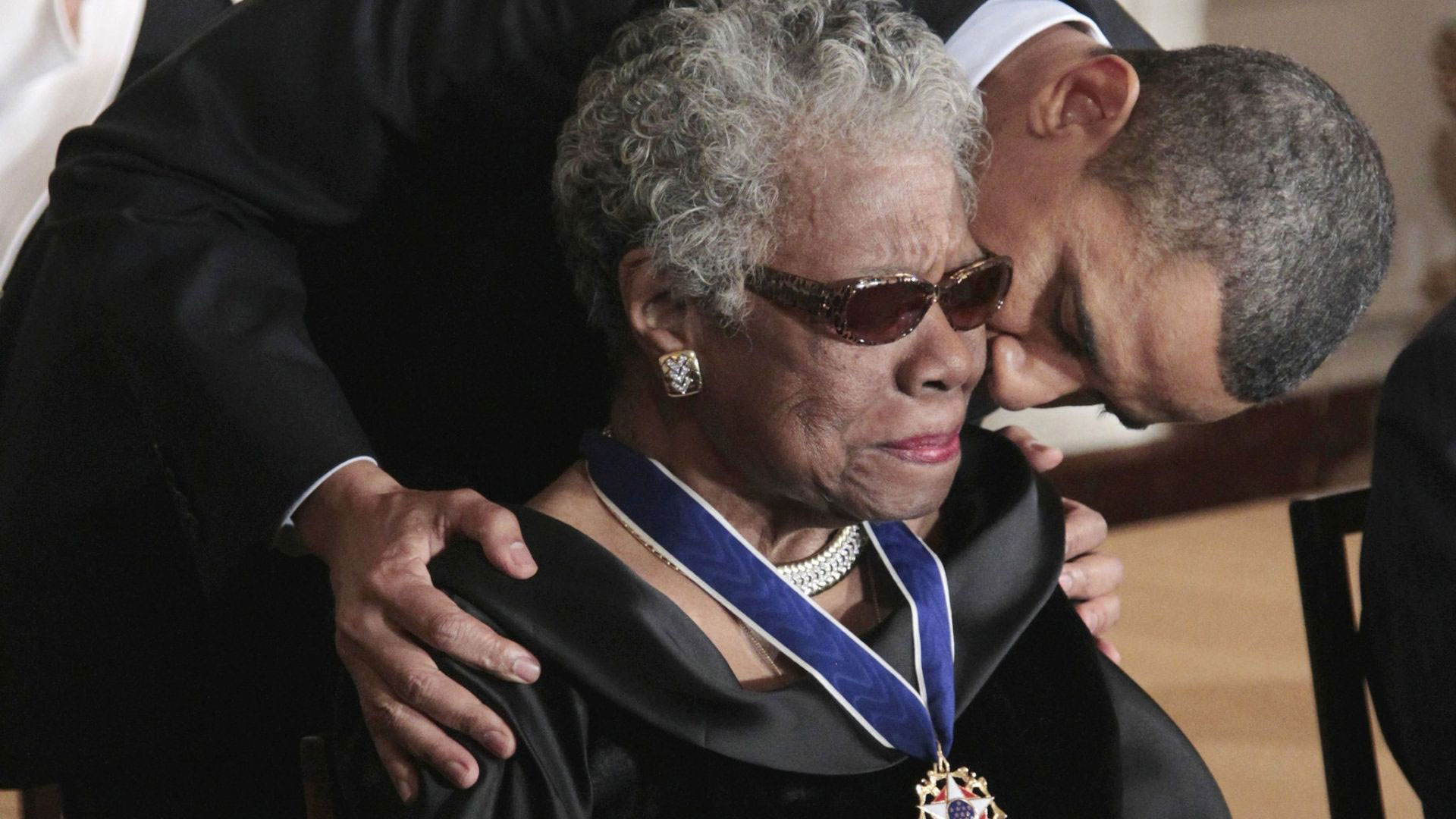 Listen and learn about the great Maya Angelou, a Phenomenal Woman in every sense of the word in this new Listening Series episode from English Plus Podcast.

Maya Angelou, born in 1928, American author, poet, performer, and civil rights activist, best known for portrayals of strong African American women in her writings. Characteristically using a first-person point of view and the rhythms of folk song, she writes of the African American woman’s coming of age, of struggles with discrimination, of the African and West Indian cultural heritage, and of the acceptance of the past. In 1993 Angelou read her poem “On the Pulse of Morning” at the presidential inauguration of Bill Clinton.

Angelou was born Marguerite Johnson on April 4, 1928, in St. Louis, Missouri. The child of divorce, she spent most of her childhood living with her grandmother in Stamps, Arkansas, the place she calls her hometown. After graduating with honors from Lafayette County Training School in 1940, Angelou was reunited with her mother in San Francisco. At the age of 16 she graduated from high school, gave birth to her son Guy, and began a series of jobs, including cooking and waiting tables.

Angelou’s career in the arts began on the West Coast, as a calypso performer and cabaret entertainer, and as a dancer in a touring company production of Porgy and Bess. She adopted the stage name Maya Angelou in 1953. “Maya” was what her brother had called her as a child, and “Angelou” was based on the last name of Tosh Angelos, whom she had married the year before. Upon moving to New York City in the mid-1950s, she attended meetings of the Harlem Writers Guild, won parts in the off-Broadway musical Calypso Heatwave (1957) and the Jean Genet drama The Blacks (1961), and recorded an album of calypso music. In 1960 she wrote and produced a revue entitled Freedom Cabaret as a way of raising money for the civil rights movement.

Angelou began her writing career as a playwright and journalist, receiving the attention and encouragement of writer James Baldwin and cartoonist and playwright Jules Feiffer. In 1970 she published the first of her autobiographical books, the popular and widely acclaimed I Know Why the Caged Bird Sings. In it she describes her rape at the age of seven and subsequent five years of self-imposed speechlessness. The series of autobiographical books continues with Gather Together in My Name (1974), Singin’ and Swingin’ and Gettin’ Merry Like Christmas (1976), The Heart of a Woman (1981), All God’s Children Need Traveling Shoes (1986), and A Song Flung Up to Heaven (2002). These writings stress the themes of courage, perseverance, self-acceptance, and the realization of an individual’s full potential.

In 1971 Angelou published her first book of poetry, Just Give Me a Cool Drink of Water ’fore I Diiie. Subsequent poetry collections include Oh Pray My Wings Are Gonna Fit Me Well (1975), And Still I Rise (1978), Shaker, Why Don’t You Sing? (1983), Now Sheba Sings the Song (1987), I Shall Not Be Moved (1990), and Phenomenal Woman (1994). The Complete Collected Poems of Maya Angelou appeared in 1994. Wouldn’t Take Nothing for My Journey Now, a book of inspirational meditations on life, was published in 1993. A collection of essays, Even the Stars Look Lonesome, appeared in 1997. In 2004 Angelou published a cookbook with anecdotes from her past, Hallelujah! The Welcome Table: A Lifetime of Memories with Recipes.

Angelou has acted in several television broadcasts, including the miniseries Roots (1977) and the weekly drama Touched by an Angel. She has received many awards and honorary degrees, including Grammy Awards (1994 and 1996) for her recordings of her poetry on the albums On the Pulse of Morning (1993) and Phenomenal Woman (1995). In 1998 Angelou made her directing debut with the release of the motion picture Down in the Delta. The film is about a troubled woman who returns to the home of her ancestors in the Mississippi Delta.

In 1993, Angelou recited her poem “On the Pulse of Morning” at the presidential inauguration of Bill Clinton, becoming the first poet to make an inaugural recitation since Robert Frost at John F. Kennedy’s inauguration in 1961.

In 2013, at the age of 85, Angelou published the seventh volume of autobiography in her series, entitled Mom & Me & Mom, which focuses on her relationship with her mother.

Angelou died on the morning of May 28, 2014 at the age 86. She was found by her nurse. Although Angelou had reportedly been in poor health and had canceled recent scheduled appearances, she was working on another book, an autobiography about her experiences with national and world leaders. During her memorial service at Wake Forest University, her son Guy Johnson stated that despite being in constant pain due to her dancing career and respiratory failure, she wrote four books during the last ten years of her life. He said, “She left this mortal plane with no loss of acuity and no loss in comprehension.”

Tributes to Angelou and condolences were paid by artists, entertainers, and world leaders, including Obama, whose sister was named after Angelou, and Bill Clinton. Harold Augenbraum, from the National Book Foundation, said that Angelou’s “legacy is one that all writers and readers across the world can admire and aspire to.”The week after Angelou’s death, I Know Why the Caged Bird Sings rose to number 1 on Amazon.com’s bestseller list.

On the Pulse of Morning