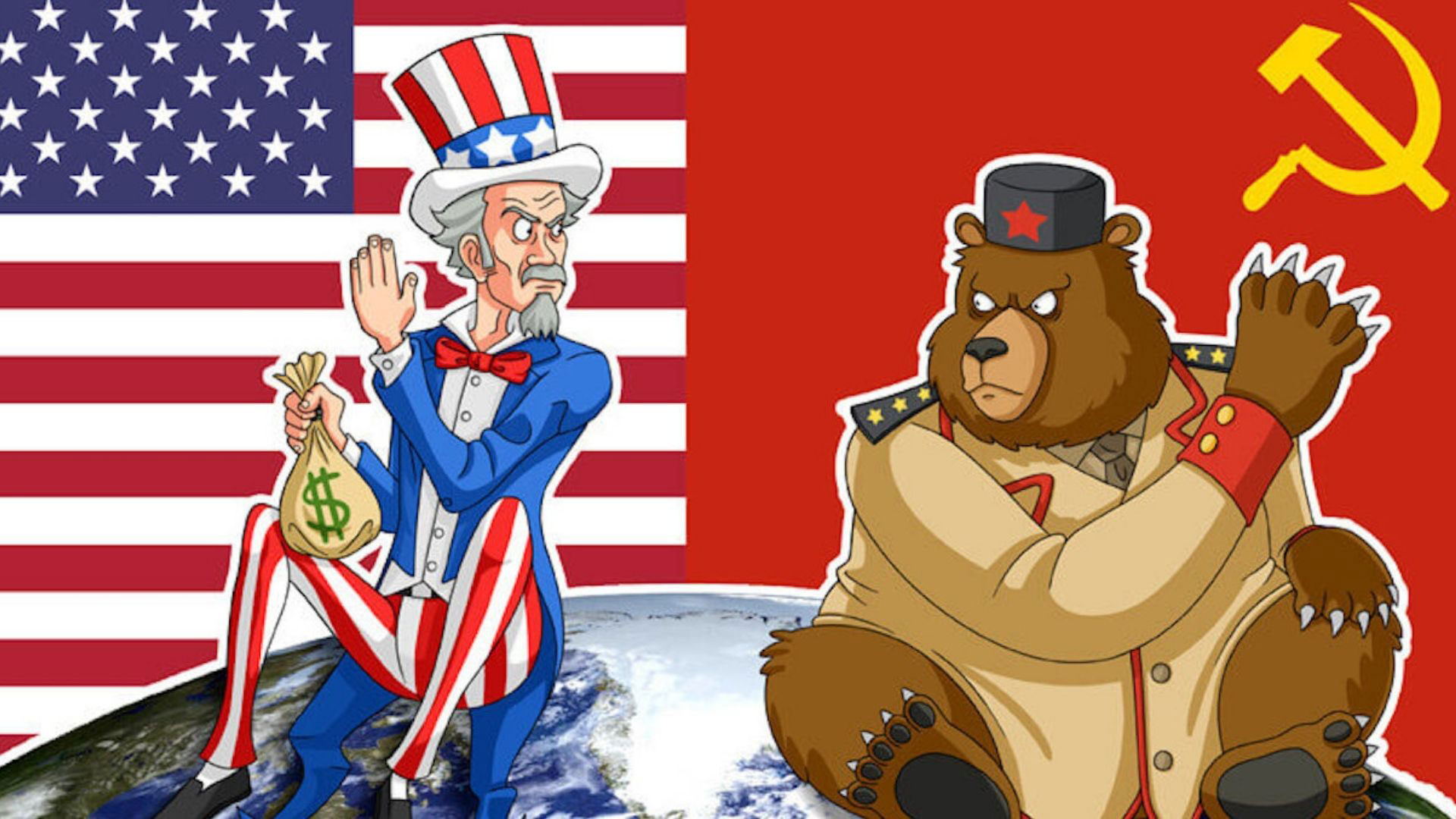 Learn about the cold war, how it started, the main conflicts it created and how it ended in this new listening episode on history from English Plus Podcast.

People once thought the Cold War would never end. Sometimes they feared nuclear bombs would blow up the world. Now the Cold War has faded to a distant memory.

The Cold War was a conflict primarily between the United States and the Soviet Union. Each power brought other countries into the conflict on its side. The Cold War lasted more than 40 years, from the mid-1940s to the end of the 1980s.

Why was the war “cold”? Because the United States and the Soviet Union never got into armed combat—a shooting or “hot” war—with each other.

HOW DID THE COLD WAR BEGIN?

The Cold War began soon after World War II ended in 1945. The United States and the Soviet Union had been allies in defeating Nazi Germany in that war. The Soviet army had invaded Germany from the east.

After the war, the Soviet Union kept control of countries in Eastern Europe that it had freed from German control. Those countries included Bulgaria, Czechoslovakia, Hungary, Poland, and Romania.

An iron curtain fell across Europe. That’s how Winston Churchill, Britain’s leader during World War II, described the division of Europe. There was no actual curtain, but there were strong barriers between Soviet-controlled Eastern Europe and largely democratic Western Europe. The Soviet Union insisted on that.

Barbed wire and armed soldiers at borders kept Eastern Europe separate from Western Europe during the Cold War. Defeated Germany was split into East Germany under Soviet control, and West Germany. Berlin, Germany’s former capital, was a divided city. In 1961, a concrete wall went up in Berlin, along the dividing line. Broken glass on top of the Berlin Wall kept people from going over it and escaping to West Germany.

WHAT WAS THE CONFLICT ABOUT?

The goal of communism was to end private ownership of property. Under communism, the people would own everything communally. They would make decisions as a group.

But things didn’t work out that way in the Soviet Union. Instead, the country became a dictatorship under the control of the Communist Party. Many freedoms were lost. Millions of people who disagreed with the Communist Party were arrested and sent to prison camps.

The United States and most of the countries of Western Europe had democratic governments rather than dictatorships. They valued freedoms that had been lost in the Soviet Union. Their economic system—capitalism—was based on private ownership and on individual rather than group effort.

At times during the Cold War, the United States lost some freedoms because of fear of communism. During the 1950s, many Americans who were suspected of sympathy for communism lost their jobs.

WHAT WAS THE ARMS RACE?

During the Cold War, each side built up its arsenal of weapons, especially nuclear weapons—atomic bombs and hydrogen bombs. These weapons could destroy cities and kill hundreds of thousands of people. Each side was afraid the other would start a nuclear war first.

A nuclear arms race began. Each side said it needed more weapons to retaliate in case of a nuclear attack. Both sides believed that if they had enough weapons the other side wouldn’t dare start a nuclear war. If it did, it would face total destruction in retaliation.

HOW DID THE COLD WAR SPREAD?

The Soviet Union had put Communist governments in power in Eastern Europe. Communist leaders had come to power in China. The Soviet Union and China backed groups that tried to take power in other countries. Wars broke out. The United States entered wars to stop the spread of communism.

With the Korean War (1950-1953), the Cold War reached Asia. China backed North Korea, and the United States supported South Korea. Korea was still divided when fighting stopped in 1953, and it remains divided today.

The United States fought the spread of communism in the Vietnam War (1959-1975). The U.S. government feared that if one Asian country fell to communism, the rest of Asia would become communist as well. The war ended with a communist victory in Vietnam. But communism did not spread throughout Asia.

HOW DID THE COLD WAR END?

The Soviet Union nearly went broke as a result of the Cold War weapons race. The Soviet people had given up hope of a better life ahead. In the mid-1980s, a new leader came to power in the Soviet Union, Mikhail Gorbachev. Gorbachev was determined to improve life in his country. In the process, he helped bring the Cold War to an end.

Gorbachev called for more freedom for his people. He and U.S. president Ronald Reagan agreed to destroy many of the weapons their countries had built. Gorbachev encouraged change in Eastern Europe, and he said that Soviet troops would no longer keep communist governments in power there.

conflict is a state of mind in which you find it impossible to make a decision.

A country’s ally is another country that has an agreement to support it, especially in war.

If you describe someone as your ally, you mean that they help and support you, especially when other people are opposing you.

An ally is someone who supports people who are in a minority group or who are discriminated against, even though they do not belong to that group themselves.

To invade a country means to enter it by force with an army.

If you say that people or animals invade a place, you mean that they enter it in large numbers, often in a way that is unpleasant or difficult to deal with.

If someone or something invades your privacy, they interfere in your life without your permission.

The division of a large unit into two or more distinct parts is the act of separating it into these parts.

A division is a significant distinction or argument between two groups, which causes the two groups to be considered as very different and separate.

A barrier is something such as a rule, law, or policy that makes it difficult or impossible for something to happen or be achieved.

A barrier is a problem that prevents two people or groups from agreeing, communicating, or working with each other.

A barrier is something such as a fence or wall that is put in place to prevent people from moving easily from one area to another.

If one thing is separate from another, there is a barrier, space, or division between them, so that they are clearly two things.

If you refer to separate things, you mean several different things, rather than just one thing.

If you separate people or things that are together, or if they separate, they move apart.

communism is the political belief that all people are equal and that workers should control the means of producing things.

A new era was brought on by the fall of communism.

The authoritarian communism in China is exactly what people are trying so hard to avoid in the West.

You use communal to describe something that is shared by a group of people.

communal means relating to particular groups in a country or society.

Romans has a tribunal of commerce and a communal college.

A dictatorship is a country which is ruled by a dictator or by a very strict and harsh government.

dictatorship is government by a dictator.

capitalism is an economic and political system in which property, business, and industry are owned by private individuals and not by the state.

In that scheme the rise and growth of capitalism was considered to be a necessary preliminary to social revolution, and it was thought that Russia had hardly entered that stage: therefore, it was not ripe for a social upheaval.

capitalism could be seen to represent the western culture and as a market dynamism for the rising China.

You use suspect when you are stating something that you believe is probably true, in order to make it sound less strong or direct.

A suspect is a person who the police or authorities think may be guilty of a crime.

An arsenal is a large collection of weapons and military equipment held by a country, group, or person.

An arsenal is a building where weapons and military equipment are stored.

You can use arsenal to refer to a large number of tools, methods, or resources that someone has available to help them achieve what they want to do.

The militia responded by saying it would retaliate against any attacks.

They may retaliate with sanctions on other products if the bans are disregarded.

If you back down, you withdraw a claim, demand, or commitment that you made earlier, because other people are strongly opposed to it.

If a building or other structure collapses, it falls down very suddenly.

If something, for example a system or institution, collapses, it fails or comes to an end completely and suddenly.

If you collapse, you suddenly faint or fall down because you are very ill or weak.