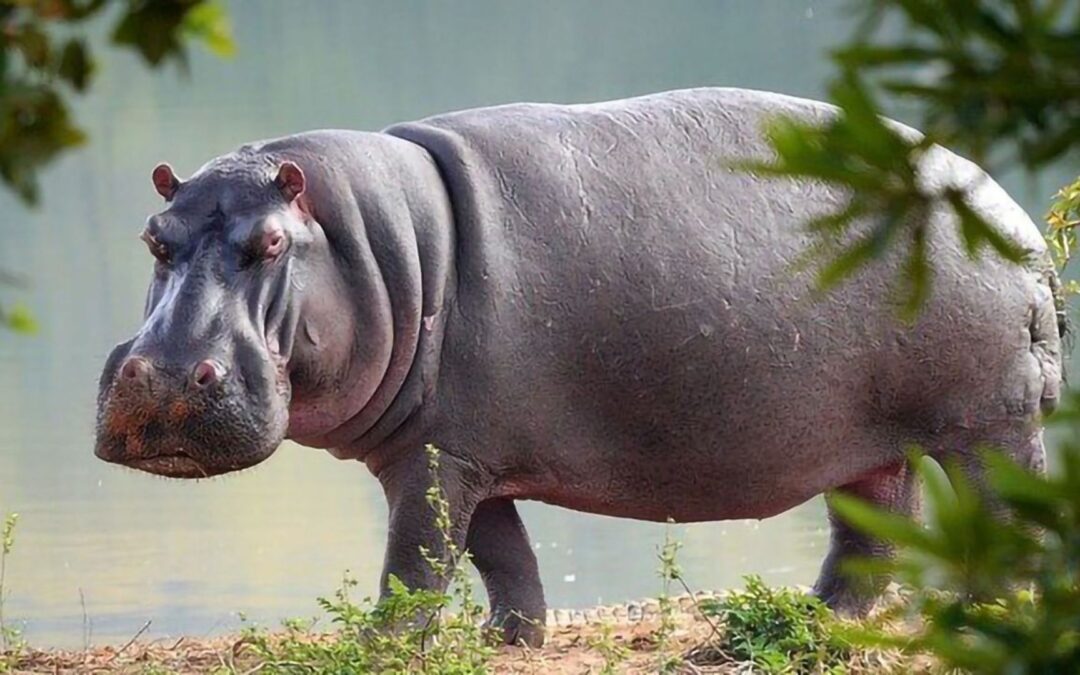 If a pig weighed as much as a pickup truck it might look something like a river hippopotamus. A hippopotamus, or hippo, is an animal that lives in Africa. Like a pig, it has a tubby body, big head, and short, thick neck. In fact, the hippopotamus is a distant relative of the pig.

There are two kinds of hippos. The pygmy hippopotamus stands no more than waist-high to an adult human. It is about 6 feet (about 2 meters) long and weighs about 600 pounds (about 270 kilograms). This hippopotamus has greenish-black skin. It lives in the forest, on or near riverbanks.

WHERE DO HIPPOS LIVE?

River hippos live half their lives in water. They float and let the water carry their great weight. They rarely sink completely below the surface, however. Instead, they paddle around with the tops of their heads sticking out of the water. A river hippo’s eyes, ears, and nose are all at the top of its head. It can breathe and see what’s going on even while most of its body is below water.

A million years ago, hippopotamuses lived all over Europe, Asia, and Africa. Now they live only in parts of Africa. There are only about 150,000 river hippos left. Pygmy hippos are down to a few thousand animals.

Hippos cannot sweat like humans do. All hippos, however, ooze a type of oil from their skin. A river hippo’s natural skin oil is red. People used to think these animals sweated blood, but that’s not true.

A hippo’s skin oil is like lotion. Hippos have thin skin for such big mammals, and it dries out easily. The oil keeps a hippo’s skin from cracking in the heat.

Hippos live in herds of 15 or more animals. During the day, they like to crowd together. They like to swim or wallow in the mud with their bodies touching. At night, however, they split up. They go out in search of food alone. For a hippo, eating is private.

CAN HIPPOS HURT YOU?

A hippopotamus eats only vegetables. Still, you wouldn’t want to get too close to one. Their size and weight alone makes them dangerous. In rivers, they can overturn boats just by pushing at them. On land, they trample plants and damage crops. They are known to have a temper, too. Their huge jaws are studded with spikelike teeth. A hippopotamus can bite a crocodile in half.