Do You Know | Mohandas Gandhi 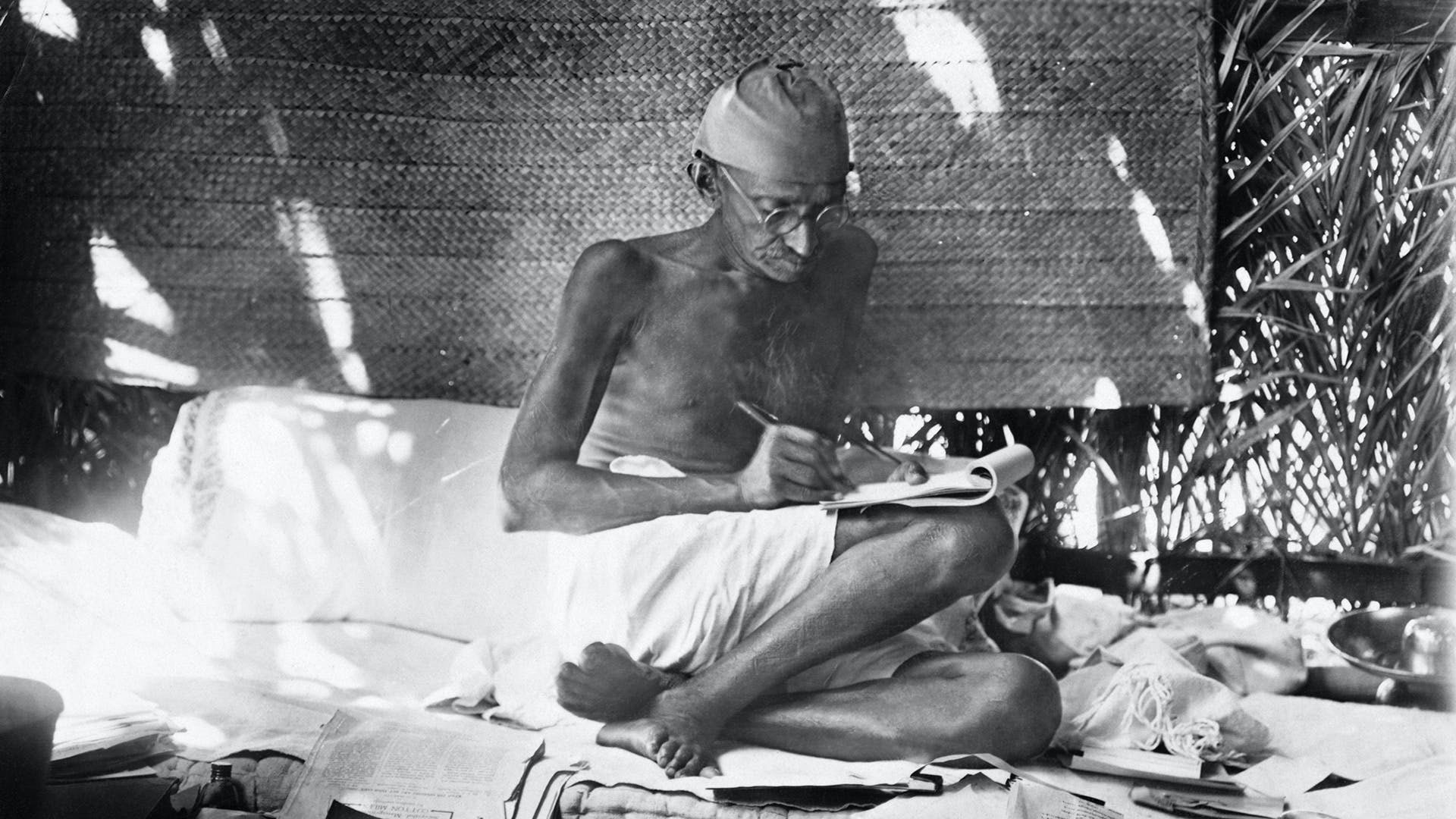 Do You Know | Mohandas Gandhi

Learn about the life of one of the greatest men in world history, Mohandas Karamchand Gandhi in this new Did You Know episode from English Pus Podcast.

Episode 231 Do You Know Mohandas Gandhi

Do You Know Mohandas Gandhi by English Plus Podcast

Mohandas Karamchand Gandhi, also known as Mahatma Gandhi, was born in Porbandar in the present state of Gujarāt on October 2, 1869, and educated in law at University College, London. In 1891, after having been admitted to the British bar, Gandhi returned to India and attempted to establish a law practice in Bombay (now Mumbai), with little success. Two years later an Indian firm with interests in South Africa retained him as legal adviser in its office in Durban. Arriving in Durban, Gandhi found himself treated as a member of an inferior race. He was appalled at the widespread denial of civil liberties and political rights to Indian immigrants to South Africa. He threw himself into the struggle for elementary rights for Indians.

Gandhi remained in South Africa for 20 years, suffering imprisonment many times. In 1896, after being attacked and beaten by white South Africans, Gandhi began to teach a policy of passive resistance to, and noncooperation with, the South African authorities. Part of the inspiration for this policy came from the Russian writer Leo Tolstoy, whose influence on Gandhi was profound. Gandhi also acknowledged his debt to the teachings of Christ and to the 19th-century American writer Henry David Thoreau, especially to Thoreau’s famous essay “Civil Disobedience.” Gandhi considered the terms passive resistance and civil disobedience inadequate for his purposes, however, and coined another term, satyagraha (Sanskrit for “truth and firmness”). During the Boer War, Gandhi organized an ambulance corps for the British army and commanded a Red Cross unit. After the war he returned to his campaign for Indian rights. In 1910, he founded Tolstoy Farm, near Johannesburg, a cooperative colony for Indians. In 1914 the government of the Union of South Africa made important concessions to Gandhi’s demands, including recognition of Indian marriages and abolition of the poll tax for them. His work in South Africa complete, he returned to India.

Gandhi became a leader in a complex struggle, the Indian campaign for home rule. Following World War I, in which he played an active part in recruiting campaigns, Gandhi, again advocating Satyagraha, launched his movement of passive resistance to Britain. When, in 1919, Parliament passed the Rowlatt Acts, giving the Indian colonial authorities emergency powers to deal with so-called revolutionary activities, Satyagraha spread through India, gaining millions of followers. A demonstration against the Rowlatt Acts resulted in a massacre of Indians at Amritsar by British soldiers; in 1920, when the British government failed to make amends, Gandhi proclaimed an organized campaign of noncooperation. Indians in public office resigned, government agencies such as courts of law were boycotted, and Indian children were withdrawn from government schools. Through India, streets were blocked by squatting Indians who refused to rise even when beaten by police. Gandhi was arrested, but the British were soon forced to release him.

Economic independence for India, involving the complete boycott of British goods, was made a corollary of Gandhi’s swaraj (Sanskrit, “self-ruling”) movement. The economic aspects of the movement were significant, for the exploitation of Indian villagers by British industrialists had resulted in extreme poverty in the country and the virtual destruction of Indian home industries. As a remedy for such poverty, Gandhi advocated revival of cottage industries; he began to use a spinning wheel as a token of the return to the simple village life he preached, and of the renewal of native Indian industries.

Gandhi became the international symbol of a free India. He lived a spiritual and ascetic life of prayer, fasting, and meditation. His union with his wife became, as he himself stated, that of brother and sister. Refusing earthly possessions, he wore the loincloth and shawl of the lowliest Indian and subsisted on vegetables, fruit juices, and goat’s milk. Indians revered him as a saint and began to call him Mahatma (Sanskrit, “great soul”), a title reserved for the greatest sages. Gandhi’s advocacy of nonviolence, known as ahimsa (Sanskrit, “noninjury”), was the expression of a way of life implicit in the Hindu religion. By the Indian practice of nonviolence, Gandhi held, Britain too would eventually consider violence useless and would leave India.

The Mahatma’s political and spiritual hold on India was so great that the British authorities dared not interfere with him. In 1921 the Indian National Congress, the group that spearheaded the movement for nationhood, gave Gandhi complete executive authority, with the right of naming his own successor. The Indian population, however, could not fully comprehend the unworldly ahimsa. A series of armed revolts against Britain broke out, culminating in such violence that Gandhi confessed the failure of the civil-disobedience campaign he had called, and ended it. The British government again seized and imprisoned him in 1922.

After his release from prison in 1924, Gandhi withdrew from active politics and devoted himself to propagating communal unity. Unavoidably, however, he was again drawn into the vortex of the struggle for independence. In 1930 the Mahatma proclaimed a new campaign of civil disobedience, calling upon the Indian population to refuse to pay taxes, particularly the tax on salt. The campaign was a march to the sea, in which thousands of Indians followed Gandhi from Ahmadābād to the Arabian Sea, where they made salt by evaporating sea water. Once more the Indian leader was arrested, but he was released in 1931, halting the campaign after the British made concessions to his demands. In the same year Gandhi represented the Indian National Congress at a conference in London.

ATTACK UPON THE CASTE SYSTEM

In 1932, Gandhi began new civil-disobedience campaigns against the British. Arrested twice, the Mahatma fasted for long periods several times; these fasts were effective measures against the British, because revolution might well have broken out in India if he had died. In September 1932, while in jail, Gandhi undertook a “fast unto death” to improve the status of the Hindu Untouchables. The British, by permitting the Untouchables to be considered as a separate part of the Indian electorate, were, according to Gandhi, countenancing an injustice. Although he was himself a member of the Vaisya (merchant) caste, Gandhi was the great leader of the movement in India dedicated to eradicating the unjust social and economic aspects of the caste system.

In 1934 Gandhi formally resigned from politics, being replaced as leader of the Congress Party by Jawaharlal Nehru. Gandhi traveled through India, teaching ahimsa and demanding eradication of “untouchability.” The esteem in which he was held was the measure of his political power. So great was this power that the limited home rule granted by the British in 1935 could not be implemented until Gandhi approved it. A few years later, in 1939, he again returned to active political life because of the pending federation of Indian principalities with the rest of India. His first act was a fast, designed to force the ruler of the state of Rājkot to modify his autocratic rule. Public unrest caused by the fast was so great that the colonial government intervened; the demands were granted. The Mahatma again became the most important political figure in India.

When World War II broke out, the Congress Party and Gandhi demanded a declaration of war aims and their application to India. As a reaction to the unsatisfactory response from the British, the party decided not to support Britain in the war unless the country were granted complete and immediate independence. The British refused, offering compromises that were rejected. When Japan entered the war, Gandhi still refused to agree to Indian participation. He was interned in 1942 but was released two years later because of failing health.

By 1944 the Indian struggle for independence was in its final stages, the British government having agreed to independence on condition that the two contending nationalist groups, the Muslim League and the Congress Party, should resolve their differences. Gandhi stood steadfastly against the partition of India but ultimately had to agree, in the hope that internal peace would be achieved after the Muslim demand for separation had been satisfied. India and Pakistan became separate states when the British granted India its independence in 1947. During the riots that followed the partition of India, Gandhi pleaded with Hindus and Muslims to live together peacefully. Riots engulfed Calcutta (now Kolkata), one of the largest cities in India, and the Mahatma fasted until disturbances ceased. On January 13, 1948, he undertook another successful fast in New Delhi to bring about peace. But on January 30, 12 days after the termination of that fast, as he was on his way to his evening prayer meeting, he was assassinated by Nathuram Godse, a Hindu fanatic.

Gandhi’s death was regarded as an international catastrophe. His place in humanity was measured not in terms of the 20th century but in terms of history. A period of mourning was set aside in the United Nations General Assembly, and condolences to India were expressed by all countries. Religious violence soon waned in India and Pakistan, and the teachings of Gandhi came to inspire nonviolent movements elsewhere, notably in the U.S. under the civil rights leader Martin Luther King, Jr.