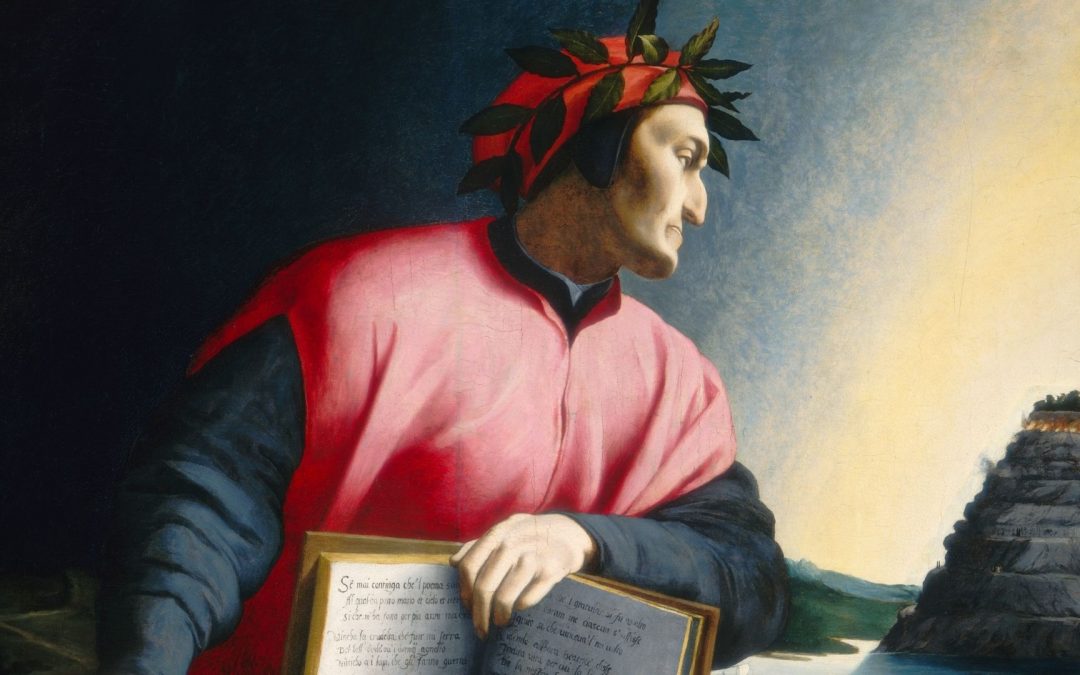 Dante Alighieri (1265-1321), Italian poet, and one of the supreme figures of world literature, who was admired for the depth of his spiritual vision and for the range of his intellectual accomplishment.

Dante was born in Florence between late May and early June 1265, into a family of the lower nobility. His mother died in his childhood, his father when Dante was 18 years old. The most significant event of his youth, according to his own account, was his meeting in 1274 with Beatrice, the woman whom he loved, and whom he exalted, first in La vita nuova (The New Life) and later in his greatest work La divina commedia (The Divine Comedy). Scholars have identified Beatrice with the Florentine noblewoman Beatrice Portinari.

Little is known about Dante’s education, although his works reveal an erudition that encompassed nearly all the learning of his age. He was greatly influenced by the works of the Florentine philosopher and rhetorician Brunetto Latini, who appears as an important figure in The Divine Comedy. Dante is known to have been in Bologna about 1285, and he may have studied at the university there. During the political struggles that occurred in Italy at this time he initially supported the faction known as the Guelphs against the party known as the Ghibellines. In 1289 he was with the Guelph army of Florence at the Battle of Campaldino, in which the Florentines triumphed decisively over the Ghibelline armies of Pisa and Arezzo. About this time he married Gemma Donati, a member of a prominent Florentine Guelph family.

Dante’s first important literary work, La vita nuova, was written not long after the death of Beatrice. It is composed of sonnets and canzoni (love poems) woven together with a prose commentary. The work narrates the course of Dante’s love for Beatrice, his premonition of her death in a dream, her actual death, and his ultimate resolve to write a work that would be a worthy monument to her memory. La vita nuova clearly exhibits the influence of the love poetry of the Provençal troubadours and represents the finest work of the dolce stil nuovo (“sweet new style”) of contemporary Florentine vernacular poetry. It transcends the Provençal tradition in that it not only describes the poet’s love in terms of a lofty idealism but suggests a spiritual significance in the object of his adoration. La vita nuova, in its sustained intensity of feeling, is one of the greatest verse sequences in European literature.

During the next few years Dante was active in the turbulent political life of Florence. Records dating from 1295 indicate that he held several local offices in that year. He was sent on a diplomatic mission to San Gimignano in 1300 and later the same year was elected one of the six priors, or magistrates, of Florence, a post in which he served for only two months. The rivalry between the two factions within the Guelph Party of Florence, the Blacks, who saw in the pope an ally against imperial power, and the Whites, who were determined to remain independent of both pope and Holy Roman emperor, became intense during Dante’s tenure. At his urging, the leaders of both factions were exiled in order to preserve peace in the city. Through the influence of Pope Boniface VIII, however, the leaders of the Blacks returned to Florence in 1301 and seized power. In 1302 they banned Dante from the city for a period of two years and fined him heavily. Failing to make payment, he was condemned to death should he ever return to Florence.

Dante’s exile was spent partly in Verona and partly in other northern Italian cities; he reached Paris between 1307 and 1309. His political beliefs underwent a pronounced conversion during this period. Eventually embracing the cause of the Ghibellines, he hoped for the unification of Europe under the reign of an enlightened emperor.

During the early years of his exile Dante wrote two important works in Latin. De Vulgari Eloquentia (Concerning the Common Speech, 1304-1305) is a treatise on the uses and advantages of the Italian language. It defends the vernacular as a literary medium, attempts to establish certain criteria of good usage in written Italian, and concludes with a section devoted to criticism of Italian poetry. The unfinished Convivio (Banquet, c. 1304-07) was intended to be a digest, in 15 books, of all the knowledge of the time. The first book was to be introductory, and the remaining 14 were to take the form of commentary on 14 poems by Dante. Only the first 4 books, however, were completed.

Dante’s political hopes were strongly aroused by the arrival in Italy in 1310 of Henry VII, king of Germany and Holy Roman emperor. Henry’s purpose was to bring Italy under his sovereignty in fact as well as in name. In a feverish burst of political activity, Dante wrote to many Italian princes and political leaders, urging them to welcome the emperor and entreating them to look upon Henry’s suzerainty as a means of resolving the bitter strife among and within the Italian cities. Henry’s death in Siena in 1313 brought Dante’s hopes to an abrupt end. The Latin treatise De Monarchia (On Monarchy), probably written during the period of Henry’s stay in Italy, is an exposition of Dante’s political philosophy, including the need for a supranational Holy Roman Empire, as well as for complete separation of church and state.

In 1316 the city of Florence invited Dante to return, but the terms offered him were those generally reserved for pardoned criminals. Dante rejected the invitation, maintaining that he would never return unless he were accorded full dignity and honor. He continued to live in exile, spending his last years in Ravenna, where he died on September 13 or 14, 1321, and was buried. His remains have been kept there despite appeals over the centuries from the Florentines, who have maintained a cenotaph for him in the Church of Santa Croce.

Among the minor works written during the last years of Dante’s life are the Quaestio de Acqua et Terra (Question of Water and of Earth) and two Latin eclogues. The former is a cosmological treatise, in Latin, dealing with a matter of great concern to contemporary thinkers: whether the surface of the sea or of any body of water is higher at any point than the surface of the earth. The eclogues are modeled after those of the Roman poet Virgil, whom Dante considered one of the most important influences on his thought.

Dante’s epic masterpiece, The Divine Comedy, was probably begun about 1307; it was completed shortly before his death. The work is an allegorical narrative, in verse of great precision and dramatic force, of the poet’s imaginary journey through hell, purgatory, and heaven. It is divided into three sections, correspondingly named the Inferno (Hell), the Purgatorio (Purgatory), and the Paradiso (Paradise). In each of these three realms the poet meets with mythological, historical, and contemporary personages. Each character is symbolic of a particular fault or virtue, either religious or political; and the punishment or rewards meted out to the characters further illustrate the larger meaning of their actions in the universal scheme. Dante is guided through hell and purgatory by Virgil, who is, to Dante, the symbol of reason. The woman Dante loved, Beatrice, whom he regards as both a manifestation and an instrument of the divine will, is his guide through paradise.

Each section contains 33 cantos, except for the first section, which has, in addition, a canto serving as a general introduction. The poem is written in terza rima (third rhyme), a three-line stanza rhyming aba, bcb, cdc, etc. Dante intended the poem for his contemporaries and thus wrote it in Italian rather than Latin. He named the poem La commedia (The Comedy) because it ends happily, in heaven, his journey climaxed by a vision of God and by a complete blending of his own will with that of the deity. The adjective divina (divine) was first added to the title in a 1555 edition.

The work, which provides a summary of the political, scientific, and philosophical thought of the time, may be interpreted on four levels: the literal, allegorical, moral, and mystical. Indeed, part of the majesty of this work rests on its multiplicity of meaning even more than on its masterfully poetic and dramatic qualities. It is supreme as a dramatization of medieval Christian theology, but even beyond that framework, Dante’s imaginary voyage can be understood as an allegory of the purification of one’s soul and of the achievement of inner peace through the guidance of reason and love.

By the 15th century many Italian cities had established professorships for the study of The Divine Comedy; in the centuries following the invention of printing, almost 400 Italian editions were published. The poem has always inspired artists. Editions have appeared illustrated by the Italian masters Sandro Botticelli and Michelangelo, the English artists John Flaxman and William Blake, and the French illustrator Gustave Doré. The Russian composer Peter Ilyich Tchaikovsky set parts of the poem to music, and it formed the subject of symphonies by the Hungarian composer Franz Liszt and the Italian composer Giovanni Pacini. It has been translated into more than 25 languages. Among the many notable translations into English are verse renditions by the American poet Henry Wadsworth Longfellow (1867), and, in the 20th century, by the English writer Dorothy L. Sayers and the American poet and critic John Ciardi.

The work of modern poets throughout the world has been inspired by Dante and imbued with Dantean imagery, especially that of Ezra Pound and T. S. Eliot, Gabriele D’Annunzio, Paul Claudel, and Anna Akhmatova.