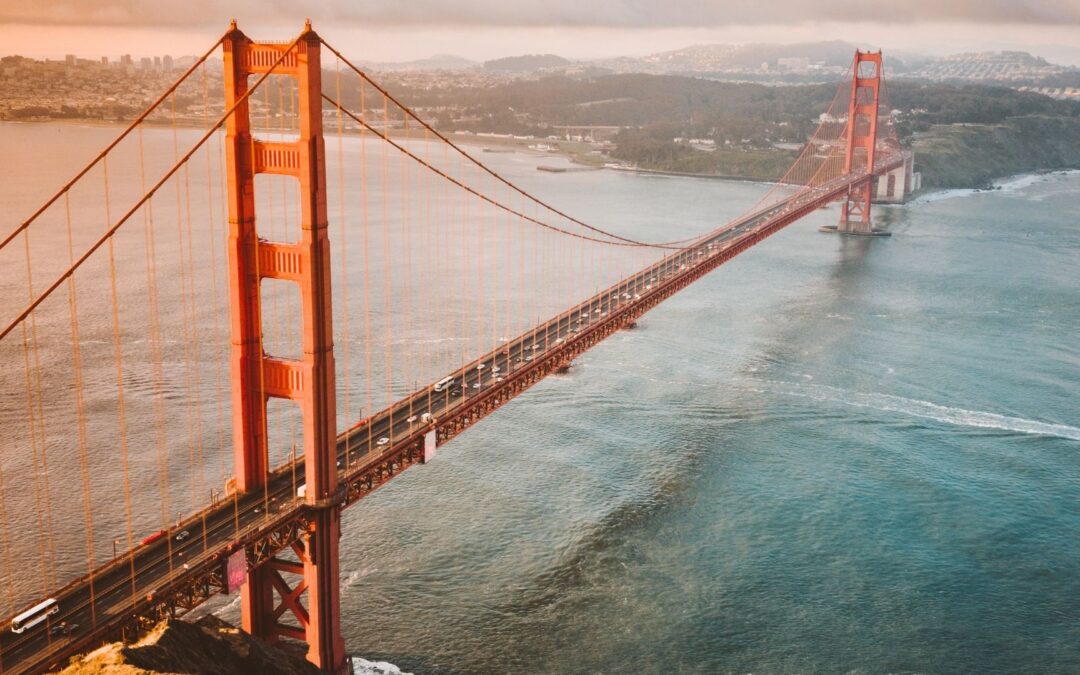 California is nicknamed the Golden State for a number of reasons. The discovery of gold in 1848 brought wealth and many people to the region. Its green fields turn golden brown in the dry seasons of summer and fall, when little rain falls. Golden poppies dot the fields in spring and summer. California is also famous for its golden sunshine.

A BIG AND BUSY STATE

About 37 million people live in California. That’s more than in any other state. Many people moved to California in the second half of the 1900s. From 1950 to 2000, the state’s population more than tripled. California ranks third in size among the states. Only Alaska and Texas cover a bigger area.

Los Angeles is the home of the entertainment industry. Movies and television shows are made here. Many people picture palm trees, swimming pools, and beaches when they think of Los Angeles. But the city also suffers from heavy traffic and air pollution.

San Francisco is one of the most beautiful U.S. cities. It’s located on hills on a narrow peninsula with water on three sides. The city’s many different neighborhoods are fun to visit. Chinatown, for example, has colorful buildings, fine Chinese restaurants, and many shops. Alcatraz is an island with a prison that once housed the nation’s most dangerous criminals.

California’s sunny climate, long coastline, and natural beauty have made it the most popular tourist state in the United States. California has 8 national parks and 20 national forests, more than any other state.

Yosemite National Park is one of the most visited parks. It’s famous for its waterfalls and granite cliffs. Many rock climbers go to Yosemite to climb a rock wall named El Capitan. Yosemite is in the Sierra Nevada, a mountain range along California’s eastern border.

Point Reyes National Seashore is on a peninsula north of San Francisco. It’s a good place to see harbor seals, sea lions, and many kinds of birds. Big Sur is a stretch of rugged coastline and wilderness south of Monterey.

Disneyland in Anaheim is another California tourist attraction. This large amusement park was created by cartoonist Walt Disney. It features a fairyland castle, a haunted mansion, a jungle safari, and many other attractions and rides.

San Diego has a world-famous zoo. As you wander through its Rain Forest Aviary, brightly colored tropical birds fly by. You’ll think you’re on safari in its outdoor Wild Animal Park, north of San Diego. Sea World in San Diego is a great place to watch whales and dolphins perform. You can also get close to sharks, penguins, and other sea animals.

In January 1848, gold was discovered at a California sawmill owned by John Sutter. The news traveled quickly. Soon gold hunters were heading for California to make their fortunes. Most of the gold hunters arrived in 1849 and so were called Forty-Niners.

At first, people could pick up gold from the ground. But such easy pickings soon ran out. A few people became very rich. Most people weren’t so lucky. Life was hard and violent, prices for food and equipment were cruelly high, and many disappointed gold hunters lacked the money to get back home. Of the 100,000 Forty-Niners, about 10,000 prospectors died from disease.

Today, you can visit Sutter’s Fort, where gold was discovered, in Sacramento, California.

The gold rush helped California reach the population of 60,000 it needed to become a state. California became the 31st state on September 9, 1850. Sacramento became the state capital in 1854.

A huge crack in Earth’s crust (outermost layer) runs through California. It’s called the San Andreas Fault. The fault, or crack, occurs where two of the plates that make up the crust meet. (Plates are massive sections of rock in the Earth.) The two plates are gradually sliding past one another. Sometimes their motion causes earthquakes. California has many earthquakes, and some of them are very serious.