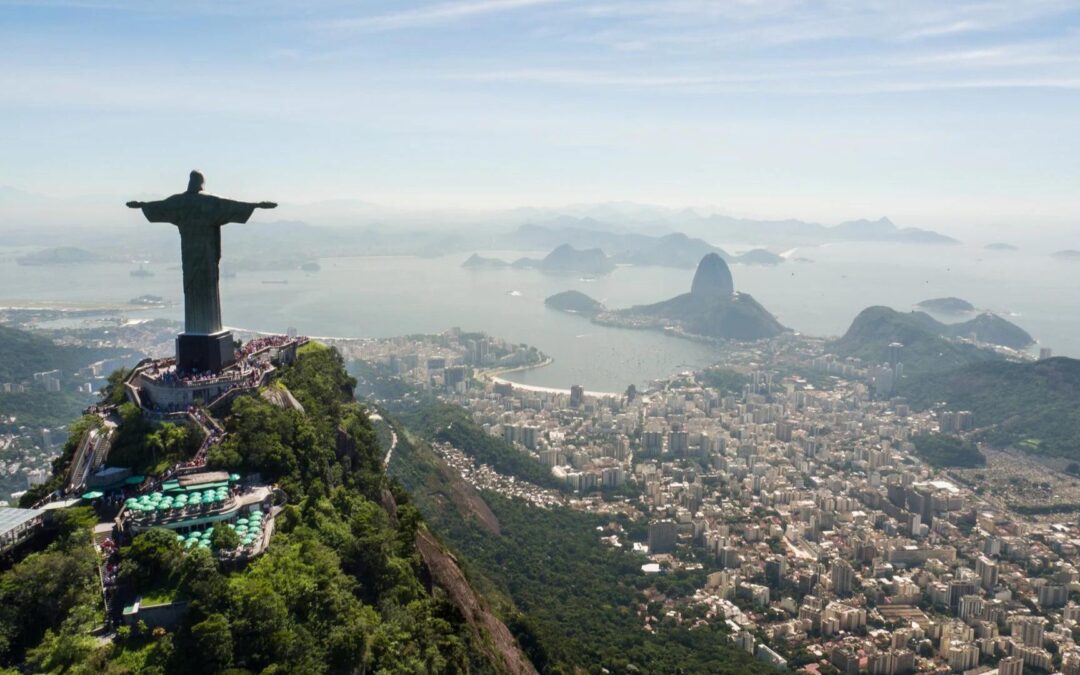 The world’s largest tropical rain forest covers most of northern Brazil. The mighty Amazon River winds through this vast forest. In the northeast, where Brazil bulges into the Atlantic Ocean, the land is cracked and dry. The Brazilian Highlands, a fertile region of hills and plateaus, reaches across the south. Sandy beaches line much of Brazil’s long coastline.

About 192 million people live in Brazil, making it the fifth most populated country in the world. Most people live near the coast in towns and cities, especially in the southeast. That’s where Brazil’s two biggest cities, São Paulo and Rio de Janeiro, are found.

The Amazon River is the world’s second longest river, after the Nile in Africa. But the Amazon carries more water than any other river. The area drained by the river is called the Amazon Basin. It covers nearly half of Brazil. Lush, tropical rain forest grows throughout this basin.

Thousands upon thousands of species of plants, birds, reptiles, fish, and mammals live in the Amazon rain forest. If you like insects, this is the place for you! There are at least 70,000 different kinds, and more are being discovered all the time.

Native Americans, such as the Kayapó and the Yanomami, live deep in the rain forest. Some still maintain their traditional ways of life. They live in small villages in the forest without things like electric lights or even running water!

Today, the Amazon rain forest is in trouble. Each year, Brazil loses thousands of square miles of forest. The forest is cleared for wood or burned to open up farmland. These actions threaten the forest and the native people living within it.

Portugal colonized Brazil in the early 1500s. Brazil is the only South American country settled by Portugal. Portuguese settlers soon built large farms, called plantations, to grow sugarcane and other crops. They brought slaves from Africa to work the fields. By the mid-1800s, coffee was Brazil’s most important crop.

Brazil’s early years as a plantation society still affects the country. A small number of people still control most of Brazil’s land and wealth. There is a large gap between rich and poor people in Brazil. Brazil’s cities are famous for their favelas. Favelas are crowded slums where millions of poor people live.

Most Brazilians are descended from three main groups of people: the native people of Brazil, Europeans (mainly Portuguese), and Africans. This blend gives Brazil a unique and varied culture.

The samba is a type of music and dance that comes from Brazil. It developed from the rhythms of African, Native American, and Portuguese music. Capoeira, an art form that combines dance and fighting moves, is another Brazilian tradition. African immigrants brought capoeira to Brazil, where it developed into a uniquely Brazilian art.

Brazilian food is a spicy blend, too. One favorite derived from Africa is acarajé, a fried bean fritter stuffed with peppered shrimp. It’s a specialty from the Bahia region in the northeast. In Rio de Janeiro, you can try feijoada, made from black beans, rice, and meat. In the south, barbecued meat, or churrasco, is a favorite.

Most Brazilians are alike in two things. Almost all Brazilians speak Portuguese. Nearly everyone belongs to the Roman Catholic Church.

Brazilians call Rio de Janeiro the Marvelous City. That’s because of its spectacular setting between the Brazilian Highlands and the Atlantic Ocean.

The city is best seen from the Christ the Redeemer statue on Corcovado Mountain. The statue was built in 1922 to celebrate 100 years of independence from Portugal. From the statue, almost the whole city is visible. A towering granite rock called Sugar Loaf Mountain rises from Guanabara Bay. The world-famous Copacabana Beach stretches along the ocean.

Every year, Rio hosts one of the world’s biggest parties. It’s called Carnival. It begins on the Friday before Ash Wednesday and lasts for five days before the start of the Christian period of Lent. Carnival is a time of elaborate parades, music, dance, and celebration.

Do you like soccer? Brazilians do. They call it fútbol, and it’s by far the most popular sport. Millions of Brazilians belong to local soccer clubs.

Perhaps the world’s most famous Brazilian is Pelé. Many people consider him the greatest soccer player of all time. By 1970, Pelé helped lead Brazil to three victories in the World Cup, an international soccer tournament.

Brazil continues to be a force in world soccer. In 2002, Brazil won its fifth World Cup, this time led by scoring great Ronaldo.