Myths and Legends | Orpheus and Eurydice 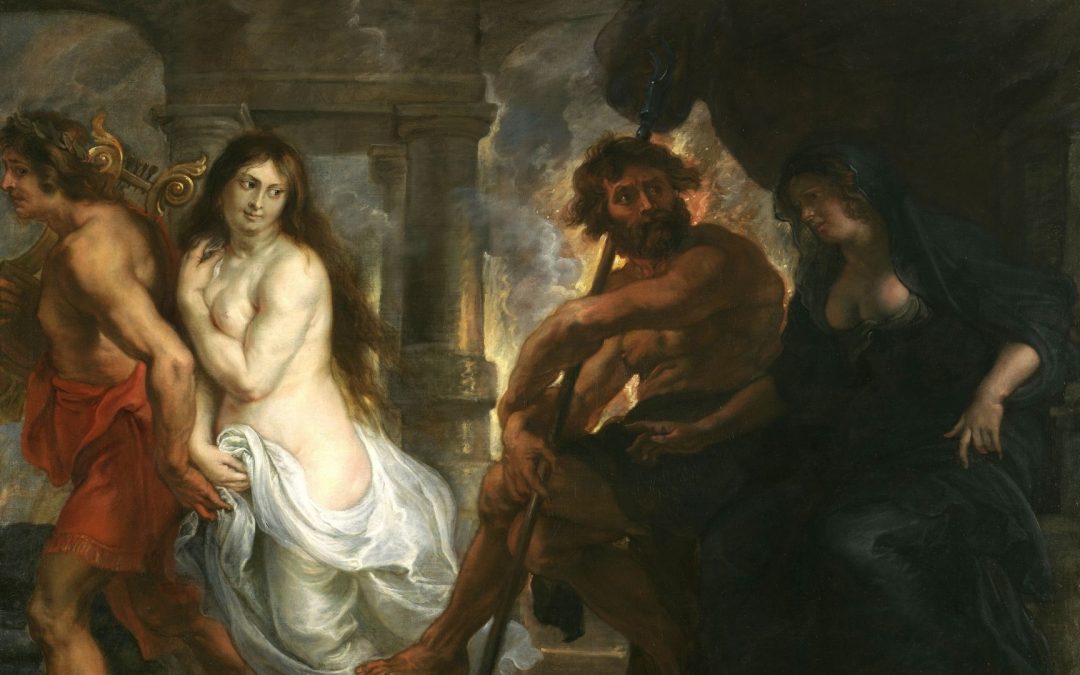 Learn about the story of Orpheus and Eurydice from Greek mythology in this Myths and Legends episode from English Plus Podcast.

In the legend of Orpheus the Greek love of music found its fullest expression. Orpheus, it is said, could make such heavenly songs that when he sat down to sing, the trees would crowd around to shade him. The ivy and vine stretched out their tendrils. Great oaks would bend their spreading branches over his head. The very rocks would edge down the mountainsides. Wild beasts crouched harmless by him, and nymphs and woodland gods would listen to him enchanted.

Orpheus himself, however, had eyes for no one but the nymph, Eurydice. His love for her was his inspiration, and his power sprang from the passionate longing that he knew in his own heart. All nature rejoiced with him on his bridal day, but on that very morning, as Eurydice went down to the riverside with her maidens to gather flowers for a bridal garland, she was bitten in the foot by a snake, and she died in spite of all attempts to save her.

Orpheus was inconsolable. All day long he mourned his bride, while birds, beasts, and the earth itself sorrowed with him. When at last the shadows of the sun grew long, Orpheus took his lyre and made his way to the yawning cave which leads down into the underworld, where the soul of dead Eurydice had gone.

Even grey Charon, the ferryman of the Styx, forgot to ask his passenger for the price of crossing. The dog, Cerberus, the three-headed monster who guards Hades’ gate, stopped full in his tracks and listened motionless until Orpheus had passed. As he entered the land of Hades, the pale ghosts came after him like great, uncounted flocks of silent birds. All the land lay hushed as that marvelous voice resounded across the mud and marshes of its dreadful rivers. In the daffodil fields of Elysium the happy dead sat silent among their flowers. In the farthest corners of the place of punishment, the hissing flames stood still. Accursed Sisyphus, who toils eternally to push a mighty rock uphill, sat down and knew not he was resting. Tantalus, who strains forever after visions of cool water, forgot his thirst and ceased to clutch at the empty air.

The pillared hall of Hades opened before the hero’s song. The ranks of long-dead heroes who sit at Hades’ board looked up and turned their eyes away from the pitiless form of Hades and his pale, unhappy queen. Grim and unmoving sat the dark king of the dead on his ebony throne, yet the tears shone on his rigid cheeks in the light of his ghastly torches. Even his hard heart, which knew all misery and cared nothing for it, was touched by the love and longing of the music.

At last the minstrel came to an end, and a long sigh like wind in pine trees was heard from the assembled ghosts. Then the king spoke, and his deep voice echoed through his silent land. “Go back to the light of day,” he said. “Go quickly while my monsters are stilled by your song. Climb up the steep road to daylight, and never once turn back. The spirit of Eurydice shall follow, but if you look around at her, she will return to me.”

Orpheus turned and strode from the hall of Hades, and the flocks of following ghosts made way for him to pass. In vain he searched their ranks for a sight of his lost Eurydice. In vain he listened for the faintest sound behind. The barge of Charon sank to the very gunwales beneath his weight, but no following passenger pressed it lower down. The way from the land of Hades to the upper world is long and hard, far easier to descend than climb. It was dark and misty, full of strange shapes and noises, yet in many places merely black and silent as the tomb. Here Orpheus would stop and listen, but nothing moved behind him. For all he could hear, he was utterly alone. Then he would wonder if the pitiless Hades were deceiving him. Suppose he came up to the light again and Eurydice was not there! Once he had charmed the ferryman and the dreadful monsters, but now they had heard his song. The second time his spell would be less powerful; he could never go again. Perhaps he had lost Eurydice by his readiness to believe.

Every step he took, some instinct told him that he was going farther from his bride. He toiled up the path in reluctance and despair, stopping, listening, sighing, taking a few slow steps, until the dark thinned out into greyness. Up ahead a speck of light showed clearly the entrance to the cavern.

At that final moment Orpheus could bear no more. To go out into the light of day without his love seemed to him impossible. Before he had quite ascended, there was still a moment in which he could go back. Quick in the greyness he turned and saw a dim shade at his heels, as indistinct as the grey mist behind her. But still he could see the look of sadness on her face as he sprung forward saying, “Eurydice!” and threw his arms about her. The shade dissolved in the circle of his arms like smoke. A little whisper seemed to say, “Farewell,” as she scattered into mist and was gone.

The unfortunate lover hastened back again down the steep, dark path. But all was in vain. This time the ghostly ferryman was deaf to his prayers. The very wildness of his mood made it impossible for him to attain the beauty of his former music. At last, his despair was so great that he could not even sing at all. For seven days he sat huddled together on the grey mud banks, listening to the wailing of the terrible river. The flitting ghosts shrank back in a wide circle from the living man, but he paid them no attention. Only he sat with his eyes on Charon, his ears ringing with the dreadful noise of Styx.

Orpheus arose at last and stumbled back along the steep road he knew so well by now. When he came up to earth again, his song was pitiful but more beautiful than ever. Even the nightingale who mourned all night long would hush her voice to listen as Orpheus sat in some hidden place singing of his lost Eurydice. Men and women he could bear no longer, and when they came to hear him, he drove them away. At last the women of Thrace, maddened by Dionysus and infuriated by Orpheus’ contempt, fell upon him and killed him. It is said that as the body was swept down the river Hebrus, the dead lips still moved faintly and the rocks echoed for the last time, “Eurydice.” But the poet’s eager spirit was already far down the familiar path.

In the daffodil meadows he met the shade of Eurydice, and there they walk together, or where the path is narrow, the shade of Orpheus goes ahead and looks back at his love.