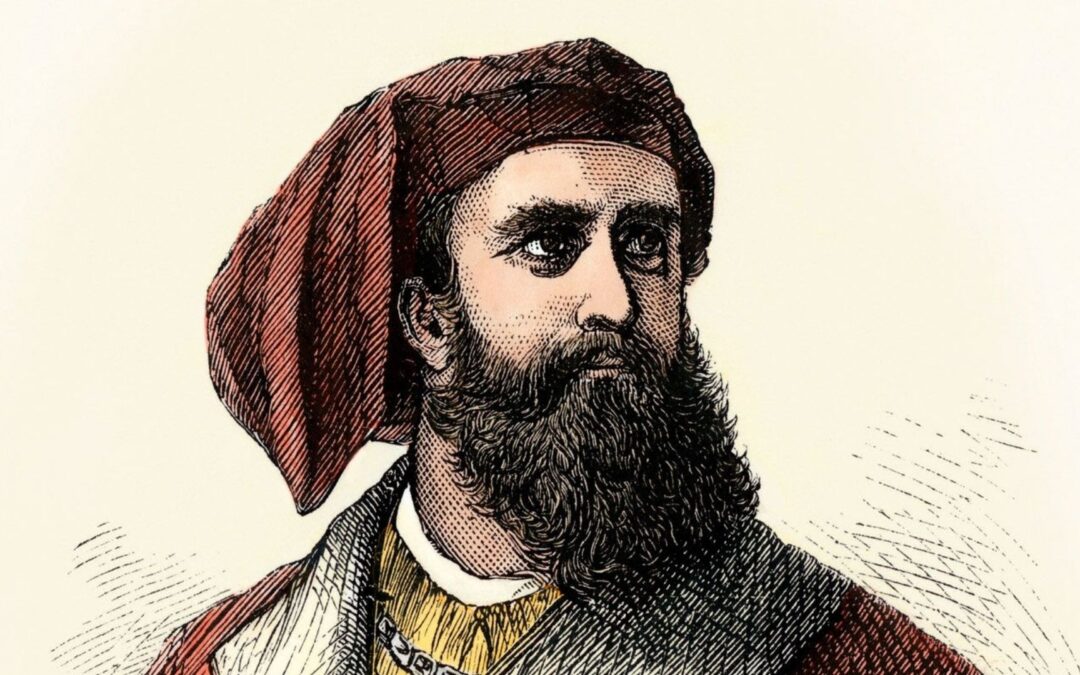 They called him “the man with a million stories.” People flocked to Marco Polo’s home to hear him tell exciting tales about his travels in distant lands.

Marco Polo won fame for his journeys across Asia. He wrote a book about his travels that became one of the most famous travel guides in history.

Marco Polo was born in 1254 to a family of merchants. His home was Venice, Italy. Venetian merchants bought and sold valuable Chinese goods, including precious silk cloth. Such goods were brought to Europe along an ancient route known as the Silk Road. The merchants also used the route to travel east on trading missions.

Marco’s mother died when he was a young boy. His family taught him to be a merchant. He learned how to read, write, calculate, and use foreign money.

In 1269, Marco’s father and uncle, Niccolò and Maffeo, returned to Venice after visiting China. In China, they had met the Mongol conqueror Kublai Khan. The khan invited the Polos to return. He asked them to bring Christian scholars to explain the Christian religion to him.

In 1271, Niccolò and Maffeo set out for China again. Marco, then 17 years old, joined his father and uncle for the trip. Two priests also traveled with the Polos. But the route was dangerous, and the priests soon turned back.

It took the Polos four difficult years to reach China. The journey led across deserts and high mountains. They passed through wild countryside where bandits lurked, ready to rob and kill. They braved heat and cold, floods, deep snowdrifts, and blinding sandstorms. At last they reached the summer palace of Kublai Khan at Shangdu.

The khan welcomed the Polos warmly. He offered Marco a job. Marco accepted, and the Polos lived in China for the next 17 years. Marco traveled on many special missions across the khan’s kingdom and to distant lands. When Marco returned from his missions, he told the khan vivid stories about the people and lands he visited.

Over time, the Polos worried that Kublai Khan would not allow them to leave. Several times they had asked the khan for permission to return to Europe. But the khan enjoyed his visitors so much that he would not grant their wish. Finally, the khan changed his mind.

In 1292, Kublai Khan asked Marco to escort a Mongol princess to Persia. The Polos traveled by ship from China to the Persian Gulf. Then the Polos headed for Venice, finally reaching home in 1295. Marco had been away so long that nobody recognized him!

We know about Marco’s travels because, in 1298, he became a prisoner of war. He shared his cell with a writer named Rustichello, who helped Marco turn his stories into a book. Rustichello added some details of his own. But much of Marco’s book seems to be true!

Marco Polo returned to Venice after his release from prison. He died in 1324. But his book remained popular for centuries. Merchants, mapmakers, and explorers all looked to the book for information about Asian lands. Even the navigator Christopher Columbus owned a copy!