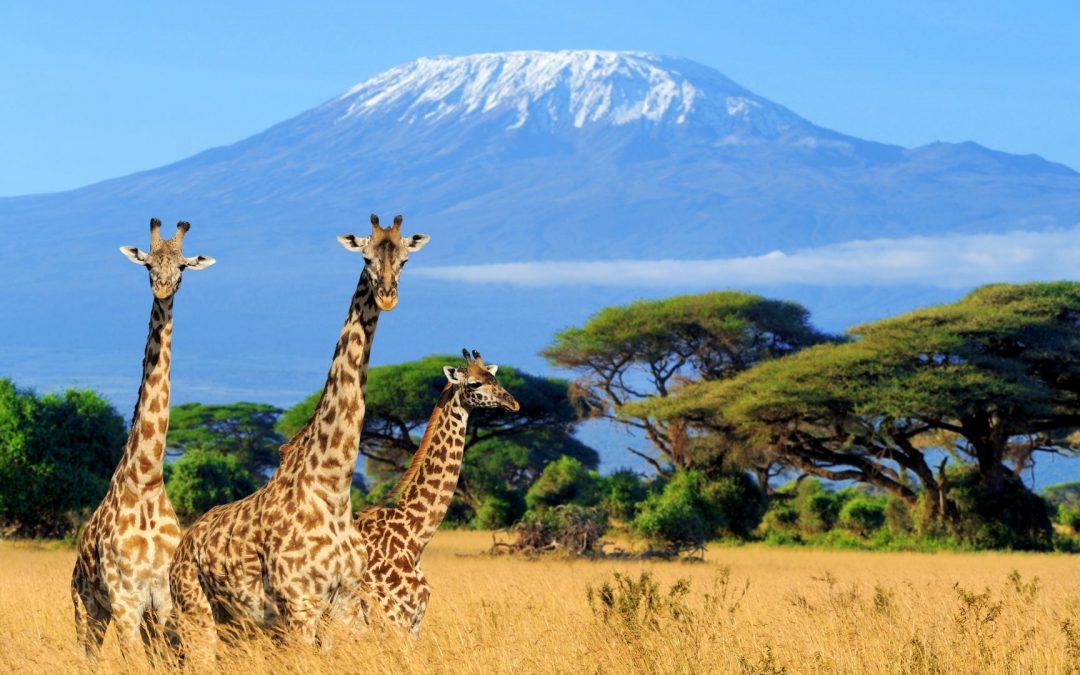 Imagine being tall enough to see over rooftops. Giraffes are that tall. They are the tallest animals in the world. What makes a giraffe so tall is its long neck. A big male giraffe stands almost 20 feet (6 meters) high. That is about as tall as a two-story building.

Giraffes live in Africa, on plains called savannas. They live in places where there are trees with leaves that they can eat.

Giraffes have short bodies and long, skinny legs. Their front legs are a little longer than their back legs. Males are usually taller than females.

Giraffes can gallop as fast as 35 miles per hour (56 kilometers per hour). That is as fast as cars often go on side streets.

Short, thick fur covers giraffes. Their fur has a pattern of brown patches. Some patches look like stepping stones from a path. Lighter colored lines separate the patches. The color and pattern of their fur helps giraffes blend in with trees and leaves. It helps giraffes hide from lions.

Giraffes have a mane, a line of longer fur along their necks. They have a tail with a long tuft of fur at the end. Giraffes use their tails to swat flies and other insects that land on them.

Giraffes have two stubby horns covered with skin on their heads. A male’s horns are bigger than a female’s horns.

HOW DO GIRAFFES EAT?

Giraffes stick their necks up and nibble the leaves off trees. Their long necks and great height help them eat leaves that are too high for other animals to reach. A giraffe wraps its long tongue around twigs with leaves the way you would grab leaves with your hand! The giraffe pulls the twigs into its mouth.

Giraffes can even eat leaves from trees that have thorns. Their tongues and lips have a hard covering. The covering lets the giraffe bite off sharp thorns that grow on some trees.

Giraffes have special teeth with deep grooves. They use their teeth to strip the leaves off twigs.

Male and female giraffes eat leaves from different parts of the tree. Males reach their long necks up to the highest branches. Females eat leaves closer to the ground.

Giraffes live together in groups called herds. There are usually about ten giraffes in a herd. Herds do not have leaders. A giraffe can leave one herd and join another.

Giraffes live peacefully until it is time to mate. Males fight each other for mates. They first wrap their necks around each other. Then they bang their horns together. They do not usually hurt each other. The loser just walks away.

A male mates with many females. The females are pregnant for about 15 months. A mother giraffe does not lie down to give birth. She stands on all four legs. The newborn calf just drops to the ground. It can stand up after only about 20 minutes!

Calves have more enemies than adult giraffes do. Lions, leopards, and hyenas kill many calves. Giraffes that reach adulthood live for about 25 years.

There were huge herds of giraffes in Africa until about 100 years ago. Hunters killed many of the animals. People destroyed places where giraffes lived. There are many fewer giraffes alive today, but they are not endangered.

Giraffes are protected. Many giraffes live in national parks and game reserves. Big giraffe herds with more than 100 members can still be found in Tanzania’s Serengeti National Park.