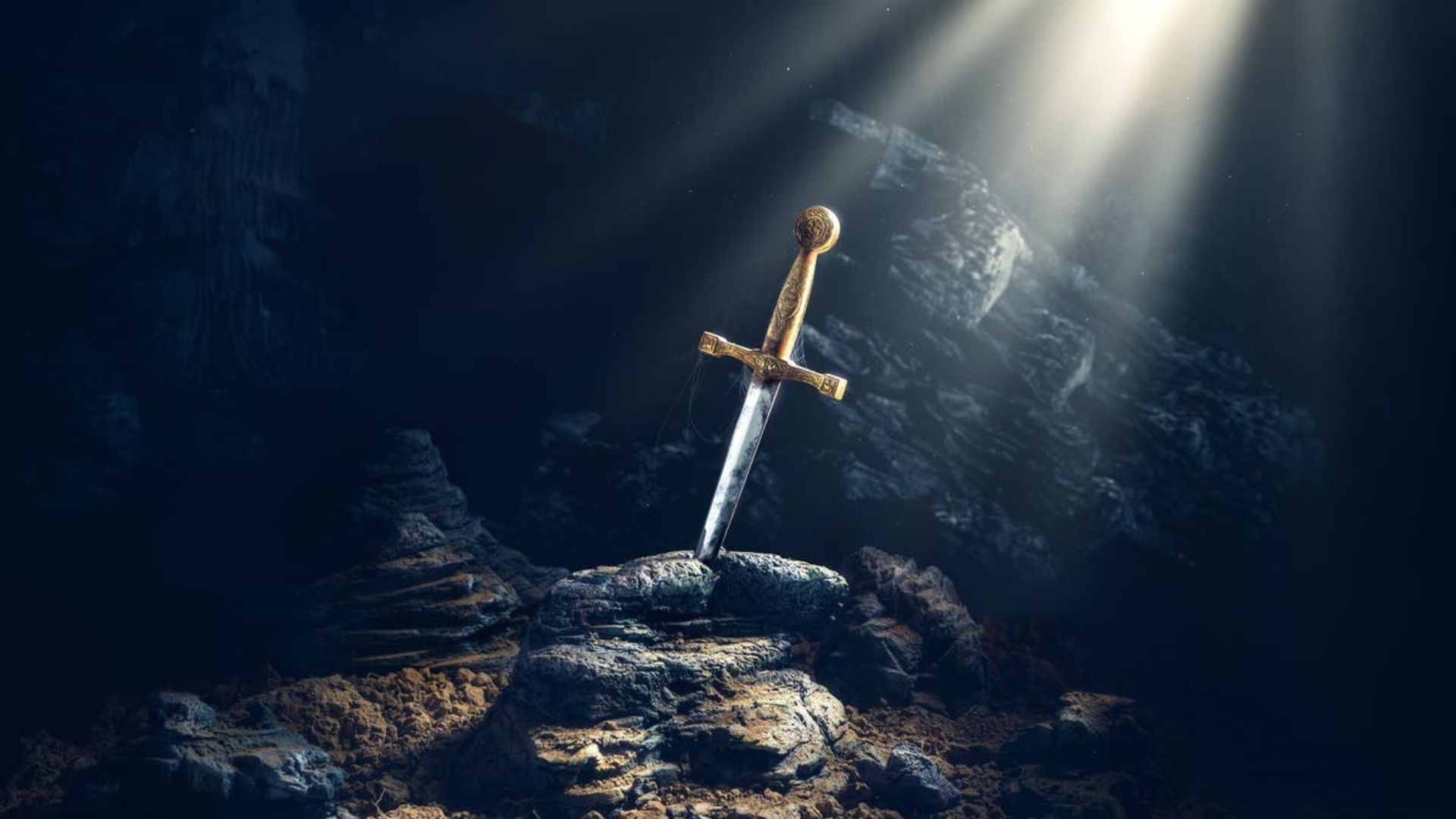 Learn about the Arthurian legend and learn ten new words in the context of the story in this new Word Power episode from English Plus Podcast.

What mental images do you get when you think of King Arthur and the Knights of the Round Table? For most people, the mention of King Arthur evokes pictures of virtuous knights in polished armor riding magnificent horses in search of adventure. However, there is no firm evidence that King Arthur ever really existed. If he did, he was probably not a king and was most certainly not named Arthur. If such a person lived at all, he was probably a Welsh warrior who fought the Germanic aggressors in the fifth century. If so, this was hundreds of years before the age of medieval knights.

This nebulous history has provoked an enormous number of Arthurian legends. It allowed generations of anonymous storytellers to enlarge on what few “facts” were known about this defender of their island. Audiences readily accepted these yarns of a native hero and added to them as they were passed along. Like some of our own stories about George Washington and Paul Revere, the stories gave Arthur all the qualities that the society held in high esteem. Consequently, King Arthur is portrayed as possessing the chivalrous qualities of the Middle Ages-bravery, courtesy, honor, and gallantry toward women. Also, since Arthur fought against heathen invaders, the stories took on a religious aspect. The broad assortment of stories about King Arthur are a mixture of history, legend, fairy tale, and moral lesson.

According to the legend, Arthur was the son of King Uther Pendragon, but he was raised by Merlin the magician and Sir Hector. Arthur proved his claim to the throne by pulling a sword, the magic Excalibur, from a great stone, something no one else could do. King Arthur and Queen Guinevere held court at Camelot. There the knights sat as equals at a round table. Conflict arose in this peaceful kingdom when Arthur’s nephew, Mordred, hatched a sinister plot to overthrow Arthur. Mordred was slain in the ensuing battle, and Arthur was mortally wounded. His body was taken to an island where he supposedly would be healed and return to continue his reign.

Narrative poems, great operas, and even Broadway musicals have been based on the Arthurian legend. Few people really care whether a King Arthur truly existed. The stories are alive.

To evoke a particular memory, idea, emotion, or response means to cause it to occur.

to call or summon up (a memory, feeling, etc), esp. from the past

to draw forth or elicit (a particular mental image, reaction, etc.)

The aggressor in a fight or battle is the person, group, or country that starts it.

a person, nation, etc. that is guilty of aggression, or makes an unprovoked attack

If you describe something as nebulous, you mean that it is vague and not clearly defined or not easy to describe.

If something provokes a reaction, it causes it.

rouse, cause, produce, lead to

If you provoke someone, you deliberately annoy them and try to make them behave aggressively.

If you remain anonymous when you do something, you do not let people know that you were the person who did it.

Something that is anonymous does not reveal who you are.

A yarn is a story that someone tells, often a true story with invented details which make it more interesting.

a long and often involved story or account, usually telling of incredible or fantastic events

If you say that someone spins a yarn, you mean that they tell a story that is not true, often an interesting or imaginative one.

esteem is the admiration and respect that you feel towards another person.

If you esteem someone or something, you respect or admire them.

An aspect of something is one of the parts of its character or nature.

The aspect of a building or window is the direction in which it faces.

An assortment is a group of similar things that are of different sizes or colors or have different qualities.

a collection or group of various things or sorts

Something that is sinister seems evil or harmful.

evil or treacherous, esp. in a mysterious way