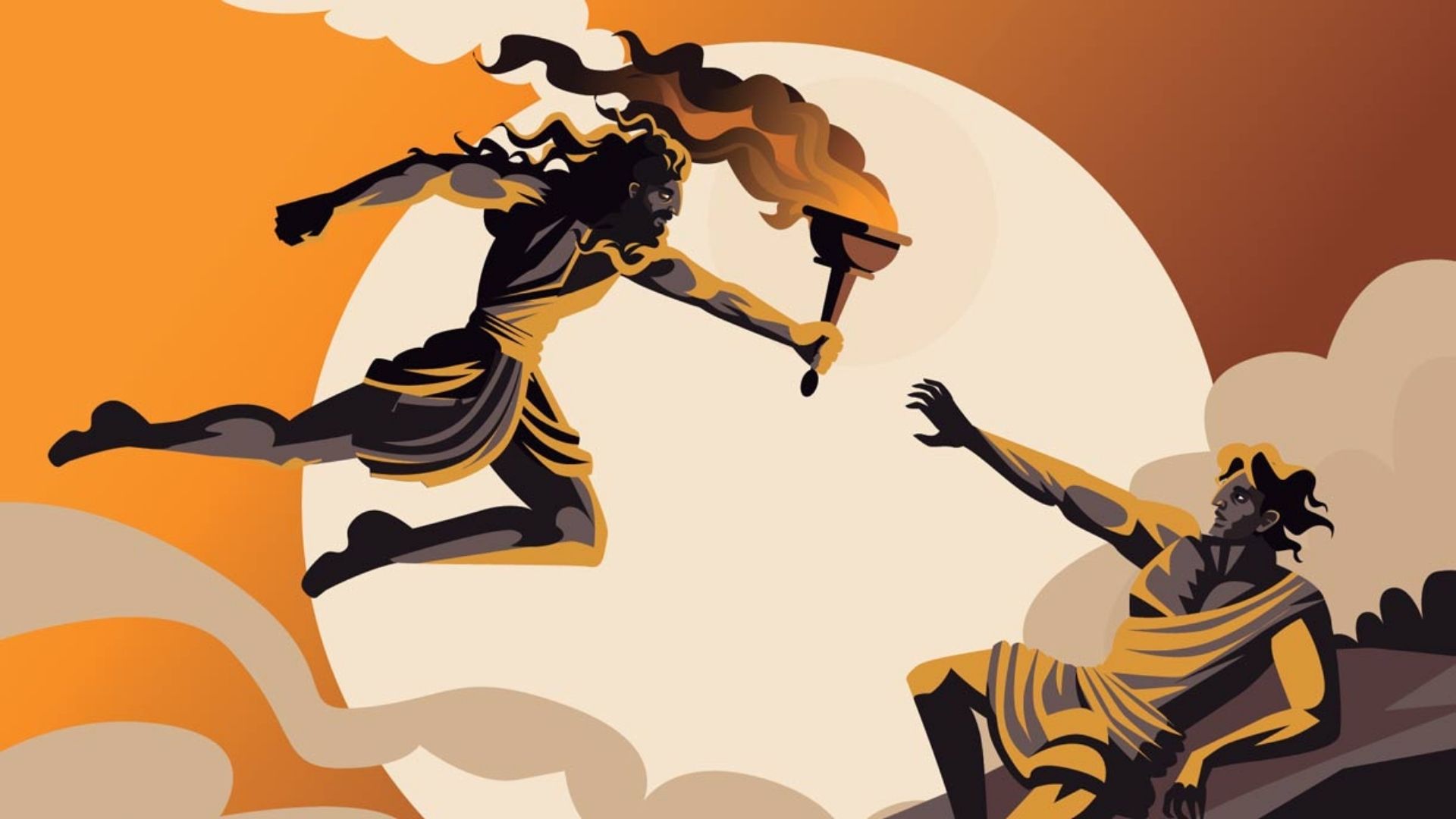 What Will You Learn in Today’s Episode?

Learn the words befall, bestow, confer, consolation, delegate, excessive, expulsion, forethought, maneuver, and retaliate in the context of a story about Prometheus and Epimetheus in this new Word Power episode from English Plus Podcast.

Zeus, the supreme ruler of the universe, with the aid of the giant Hercules and other gods, had rid the earth of the Titans and the Giants. The expulsion of these brutal creatures ensured that humans could now feel safe on Earth. The creation of humankind was at hand.

Zeus, grateful for Prometheus’s assistance in the war with the Titans, delegated the job of creating man to him and his brother Epimetheus. Prometheus was very wise and gave much forethought to this task. Epimetheus, on the other hand, was not especially wise and tended to act without thinking.

So it was little wonder that Epimetheus thoughtlessly gave all the best gifts to the animals. He made them strong, fast, brave, and clever. He also conferred upon the animals fur, feathers, and shells. As a result, no great gifts remained to bestow on humans. Without strength, bravery, cleverness, and a warm, protective coat, how could humans be protected from the animals?

Epimetheus sought out his brother Prometheus for help. Prometheus thought about the problem that Epimetheus had so recklessly caused and decided to grant man a splendid shape, allowing him to stand erect like the gods. Then he brought fire down from the heavens and gave it to man. Fire was a far superior defense than anything given to the animals.

Zeus felt that Prometheus had been excessively generous to man in giving him fire. In addition, Zeus was angered that Prometheus had arranged, by trickery, for man to get the best portion of sacrificed animals, while the gods got the worst parts. Zeus retaliated against this maneuver by creating Pandora, the first woman. She was beautiful, shy, and tempting to men and gods alike.

Zeus made a box for Pandora which held all the evils that could befall humans. In her curiosity, Pandora one day opened the box. Out came horrors that brought misery and calamity to humans. However, one good thing had been put in the box and was also released. That wondrous thing was Hope. Still today, hope remains humans’ consolation amidst all the sufferings they must endure.

Unlock the Meaning of The New Words

expulsion is when someone is forced to leave a place.

expulsion is when someone is forced to leave a school, university, or organization.

expulsion is when something is forced out from your body.

entrust, transfer, hand over, give

If you are delegated to do something, you are given the duty of acting on someone else’s behalf by making decisions, voting, or doing some particular work.

If you act with forethought, you think carefully before you act about what will be needed, or about what the consequences will be.

To confer something such as power or an honor on someone means to give it to them.

grant, give, present, accord

When you confer with someone, you discuss something with them in order to make a decision. You can also say that two people confer.

To bestow something on someone means to give or present it to them.

present, give, accord, award

to present (a gift) or confer (an award or honor)

If you describe the amount or level of something as excessive, you disapprove of it because it is more or higher than is necessary or reasonable.

immoderate, too much, enormous, extreme

exceeding the normal or permitted extents or limits; immoderate; inordinate

pay someone back, hit back, strike back, reciprocate

to take retributory action, esp. by returning some injury or wrong in kind

If you maneuver a situation, you change it in a clever and skillful way so that you can benefit from it.

Military maneuvers are training exercises which involve the movement of soldiers and equipment over a large area.

If you maneuver something into or out of an awkward position, you skillfully move it there.

If something bad or unlucky befalls you, it happens to you.

happen to, fall upon, occur in, take place in

to take place; come to pass

consolation can be used to refer to a person or thing that is a source of comfort in a time of suffering, grief, disappointment, etc.

the act of consoling or state of being consoled; solace