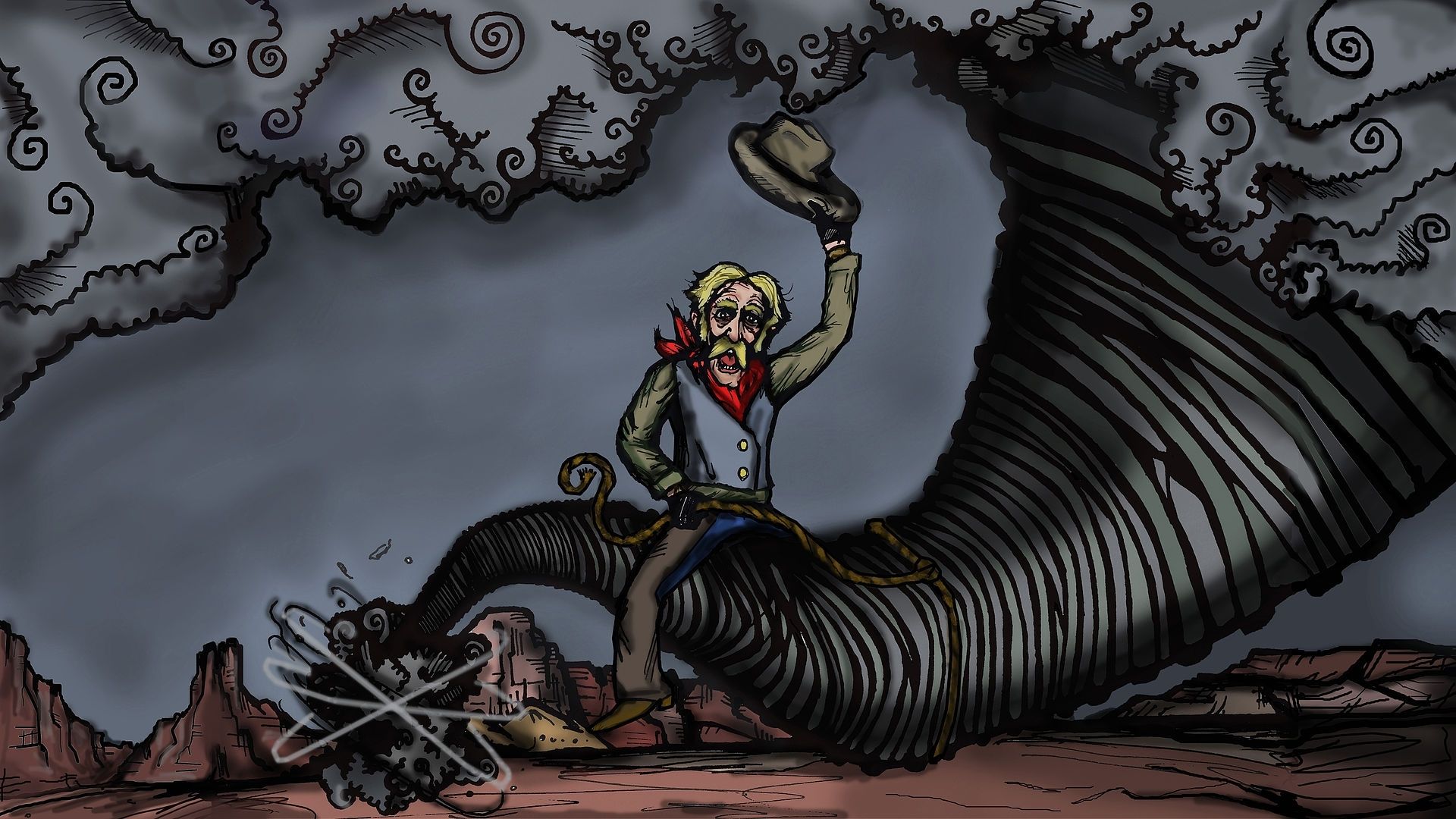 Learn about the larger-than-life Pecos Bill and learn ten words you can add to your vocabulary bank in this new Word Power episode from English Plus Podcast.

Some may claim it far-fetched, but it’s no exaggeration to say that Pecos Bill pretty much made the West what it is today. Even now, on quiet summer nights the old-timers like to reminisce about the day Pecos Bill concocted that newfangled gadget called the lasso or how he taught them to round up cattle for market. Why, some claim he even made it rain once.

It all started when Bill was just a baby. When settlers moved in just 50 miles away his pa decided things were getting too crowded. He piled Bill and his 12 brothers and sisters into a wagon and set out for the West. While trying to negotiate a rocky riverbed the wagon hit a huge rock, bouncing Bill out on the ground. Because there were so many children it was weeks before anyone missed him. All alone on the Texas plains, Bill was raised by coyotes, and he grew up strong and brave. But since he was isolated from people, he thought he was a coyote too . Then one day a cowboy came along and convinced Bill that he was human.

Pecos Bill decided that he would be a cowboy. He resolved to be the best cowboy in the West. While other cowboys rode horses, Bill straddled a mountain lion. He taught men how to use spurs, and he made the first ten-gallon hat. Bill and some other cowboys were out riding one day when a big rattlesnake reared its head in their path. The others ran off in a panic, but not Bill. He jumped from his mountain lion, grabbed the snake by the tail, and whipped it around like a rope. Then he made a loop in one end of the snake and began tossing it over the necks of lizards and other animals. The cowboys were amazed at what they saw. Up until then they caught their cattle by sneaking up on them and tying their feet together before they could run off. Now they had a lasso.

Many cowboys rode wild horses, but Pecos Bill once rode a cyclone. It happened the year when no rain fell. Cattle were dying of thirst. Crops had withered to a brown powder. When a whirling black cloud came spinning toward the parched ground Bill leaped on it and dug his spurs into its side until water began pouring clown. He rode the cyclone over three states, finally falling to the ground in California. The hole he left in the ground is now called Death Valley.

If you exaggerate, you indicate that something is, for example, worse or more important than it really is.

If you reminisce about something from your past, you write or talk about it, often with pleasure.

to think, talk, or write about remembered events or experiences

If you concoct something, especially something unusual, you make it by mixing several things together.

If you concoct an excuse or explanation, you invent one that is not true.

If you negotiate an area of land, a place, or an obstacle, you successfully travel across it or around it.

get round, clear, pass, cross

If people negotiate with each other or negotiate an agreement, they talk about a problem or a situation such as a business arrangement in order to solve the problem or complete the arrangement.

If you feel isolated, you feel lonely and without friends or help.

An isolated place is a long way away from large towns and is difficult to reach.

If someone or something convinces you of something, they make you believe that it is true or that it exists.

If someone or something convinces you to do something, they persuade you to do it.

If you resolve to do something, you make a firm decision to do it.

To resolve a problem, argument, or difficulty means to find a solution to it.

If you straddle something, you put or have one leg on either side of it.

sit astride, bestride, mount, sit with legs either side of

If something straddles a river, road, border, or other place, it stretches across it or exists on both sides of it.

When a horse rears, it moves the front part of its body upwards, so that its front legs are high in the air and it is standing on its back legs.

raise up, lift, hold up, elevate

The rear of something such as a building or vehicle is the back part of it.

If something, especially the ground or a plant, is parched, it is very dry, because there has been no rain.

dried out or up, dry, withered, scorched

If your mouth, throat, or lips are parched, they are unpleasantly dry.