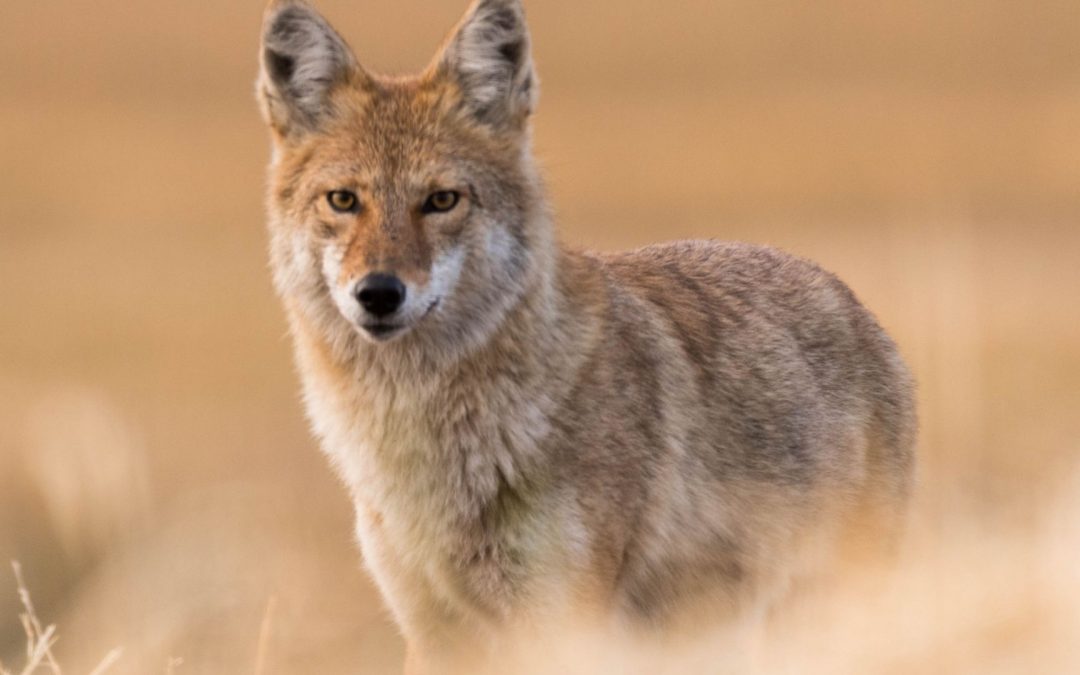 Learn bereaved, barbarous, conclave, deteriorate, scurry and more words in the context of the story of Coyote Enters the Upper World in a new Word Power episode from English Plus Podcast.

It is said that, long ago, Native Americans could assume the shapes of animals. The Coyote was their favorite shape because he was the shrewdest of all the animals. He was not as big as a Grizzly Bear. In fact, his meager body looked more like that of a small dog. He was, however, a master of magic and a clever trickster.

One day, Coyote overheard a conclave of the animals. They were engaged in an argument over who was the most powerful. When the arguments grew fierce and the behavior downright barbarous, Coyote entered the secret meeting and proposed a test. Whoever was brave enough to climb the tallest pine to the Eagle’s nest would be named most powerful.

One by one, the animals tried. Red Squirrel, always in a fog, forgot what he was doing halfway up and scurried down in a flash. Grizzly Bear’s great weight almost snapped the trunk of the tree, forcing him back down. Little Black Bear might have been successful, but Coyote used magic to make the treetop and nest rise higher and higher.

When it was Coyote’s turn, he took on his human shape and warned the other animals not to watch him climb, as it would cause him to lose his powers. At first, Coyote climbed rapidly, but soon he weakened. “Look away!” Coyote shouted when he saw the animals looking up at him. They obeyed, and Coyote resumed his ascent. Once again however, his powers began to deteriorate. Oh, how he wished he had not made the tree taller! Coyote kept climbing until he passed through a cloud and into the Upper World. There he met two spiders whom he recognized as his grandfathers.

Coyote returned to his animal form so that his grandfathers would know him. Then he explained what had happened and why he was too weak to return to earth on his own. The grandfathers handed Coyote a silver thread to lower himself through the clouds and down to earth. Coyote was not eager to descend to earth, but he held tight and slowly returned to earth.

On the ground, the other animals were sure Coyote was dead. When Coyote saw his bereaved friends, he told them that the time of the humans was nearing. From that time on, no one would be allowed to return from the Upper World. The animals listened attentively, for Coyote proved to be the most powerful of all.

If you assume a particular expression or way of behaving, you start to look or behave in this way.

If you describe an amount or quantity of something as meager, you are critical of it because it is very small or not enough.

A conclave is a meeting at which the discussions are kept secret. The meeting which is held to elect a new Pope is called a conclave.

If you describe something as barbarous, you strongly disapprove of it because you think that it is rough and uncivilized.

If you propose something such as a plan or an idea, you suggest it for people to think about and decide upon.

When people or small animals scurry somewhere, they move there quickly and hurriedly, especially because they are frightened.

An ascent is an upward journey, especially when you are walking or climbing.

If something deteriorates, it becomes worse in some way.

go down, come down, walk down, move down

A bereaved person is one who has a relative or close friend who has recently died.