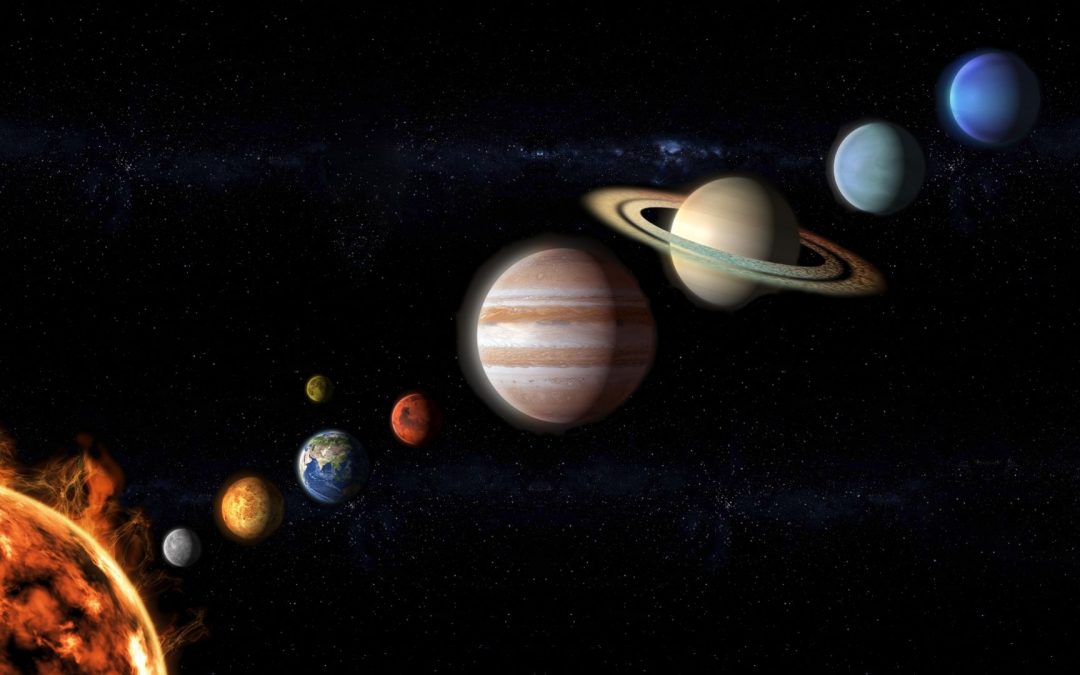 What Is the Solar System

Our solar system lies near the edge of the Milky Way galaxy. A galaxy is a huge collection of stars. The Milky Way is shaped like a whirlpool. All the stars in the galaxy, including our Sun, orbit around the center of the Milky Way.

The Sun, like other stars, is a hot ball of gas. Hydrogen and helium are the main gases in the Sun. Almost all the energy in our solar system comes from the Sun. The Sun changes hydrogen into helium to create light and heat. These changes take place deep inside the Sun.

Mercury is the planet that is closest to the Sun. It has a large core, or center, that is made of iron. Venus, the next planet from the Sun, is the hottest of the planets. The temperature on Venus is about 890° Fahrenheit (about 477° Celsius). Earth is the only planet known to have life. It also has plenty of liquid water. There are signs that liquid water may once have flowed on Mars, but now Mars is cold and dry. What happened to the water on Mars is a great mystery that scientists are trying to solve.

Jupiter is the largest of the planets. A thick atmosphere made of hydrogen and helium surrounds it. Jupiter’s clouds look like white, brown, and orange stripes going around the planet. There is an oval-shaped red spot in the clouds. Astronomers think this spot is a big storm that has been raging for hundreds of years! Saturn is the second largest planet and the sixth planet from the Sun. It has bright rings around it. Uranus and Neptune look like smooth blue balls. Methane gas gives these planets their blue color. Pluto is the smallest planet in our solar system. It is far from the Sun and very cold. Temperatures on Pluto can drop down to -387° Fahrenheit (-223° Celsius).

MOONS AROUND THE PLANETS

Seven of the planets have natural satellites, or moons. Mercury and Venus do not have any moons. Earth has 1 moon and Pluto has 3. Mars has 2 moons. Neptune has 13 known moons; Uranus has at least 27 moons; Saturn has 47 moons; Jupiter has at least 63 moons. Jupiter’s moon Io has active volcanoes.

There are thousands of asteroids in the solar system. Asteroids are small pieces of rock and metal. Most of them orbit the Sun between Mars and Jupiter. Asteroids that crash into Earth are called meteors. Sometimes they burn up as they fall toward Earth. They make streaks of light in the night sky. Pieces that land on the ground are called meteorites.

Comets are another type of object in the solar system. Comets are like dirty snowballs. They are made of ice and dust. Comets are usually far out in the solar system. Sometimes a comet comes in close to the Sun. When it comes in close, the comet starts to melt and looks like it has a long tail streaming out behind it. In 1994 pieces of a comet called Shoemaker-Levy 9 crashed into Jupiter. The crash made huge explosions and sent up fireballs that were larger than Earth.

HOW DID THE SOLAR SYSTEM FORM?