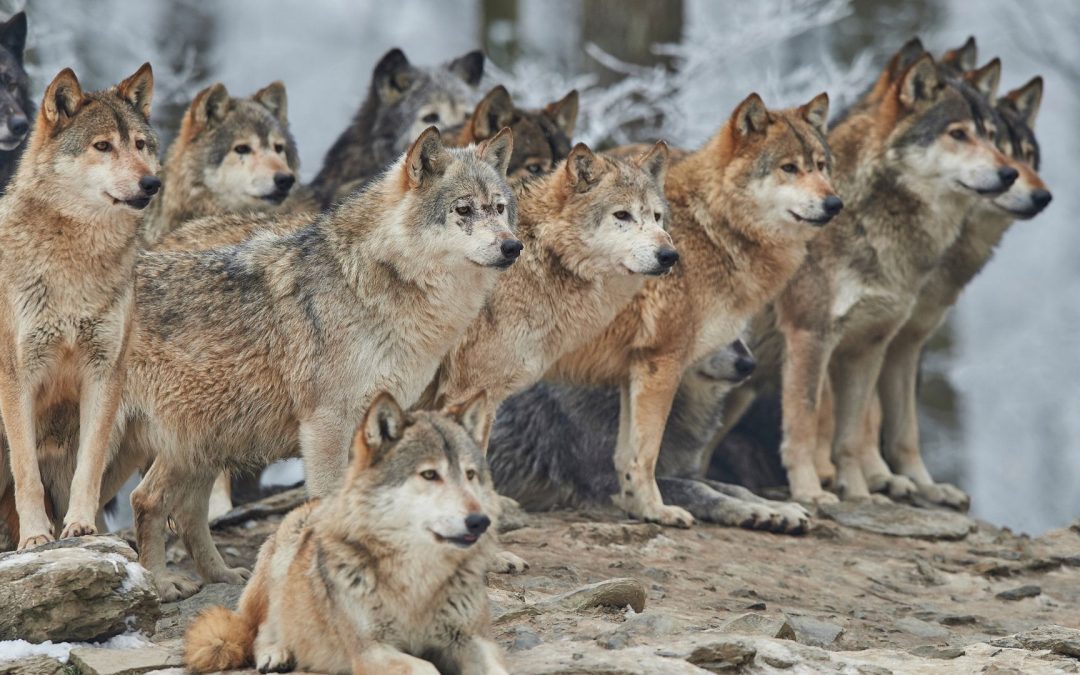 Suppose you saw a wolf in the woods. Would you be scared? Many scary stories have been told about these strong meat-eating animals. Wolves like to gather in groups and howl at night. In lonely places, this howling sounds frightening. But wolves almost never attack people.

From a distance you might not be able to tell a wolf from a dog. Wolves look very much like some dogs, such as German shepherds. The main difference is size. Wolves are bigger. They can be 6 feet (2 meters) long and weigh 200 pounds (90 kilograms).

Wolves and dogs come from a common ancestor. Dogs were tamed by humans and bred for different purposes, so their appearance changed. Wolves stayed in the wild. They look much like the ancestor they share with dogs.

Today there are two kinds of wolves. One is the timber wolf, also known as the gray wolf. The other is the red wolf.

WHERE DO WOLVES LIVE?

Timber wolves used to roam much of the Northern Hemisphere. Now, you’ll find them only in the lonely forests and plains of the far north. Red wolves live only in Texas and a few other southern states.

Wolves live in all kinds of terrain, from forests to plains. They make their homes in caves or hollows or in deep brush. There, hidden from view, they can raise their pups in safety.

LIFE AMONG THE WOLVES

Female wolves give birth each spring. They can have as many as 11 pups in a litter or as few as 1.

Wolves live in family groups called packs. In the winter, families join up to form larger packs of 30 wolves or more. The wolves in a pack work together to hunt large animals such as moose, elk, and deer. Generally they go after the weakest animals. They chase an old or wounded beast until it gets tired. Once it drops, they move in for the kill. They also hunt very young animals.

In the summer, big packs break up into smaller groups. They hunt smaller prey such as rabbits and mice.

HOW DO WOLVES GET ALONG?

Wolves fight, but they don’t hurt each other. When one wolf feels itself losing, it gives up. It lies on its back and lifts its head to leave its throat unprotected. At this signal, the other wolf immediately stops fighting too. Wolf pups that keep losing fights end up as low-ranking members of the pack. When there is food to eat, higher-ranking wolves eat first. If mates are scarce, only the higher-ranking wolves get to mate. Each wolf pack has its own territory. They do not fight over territory. Each pack marks the edges of its territory by spraying urine there. When other wolves smell these markers, they stay out.