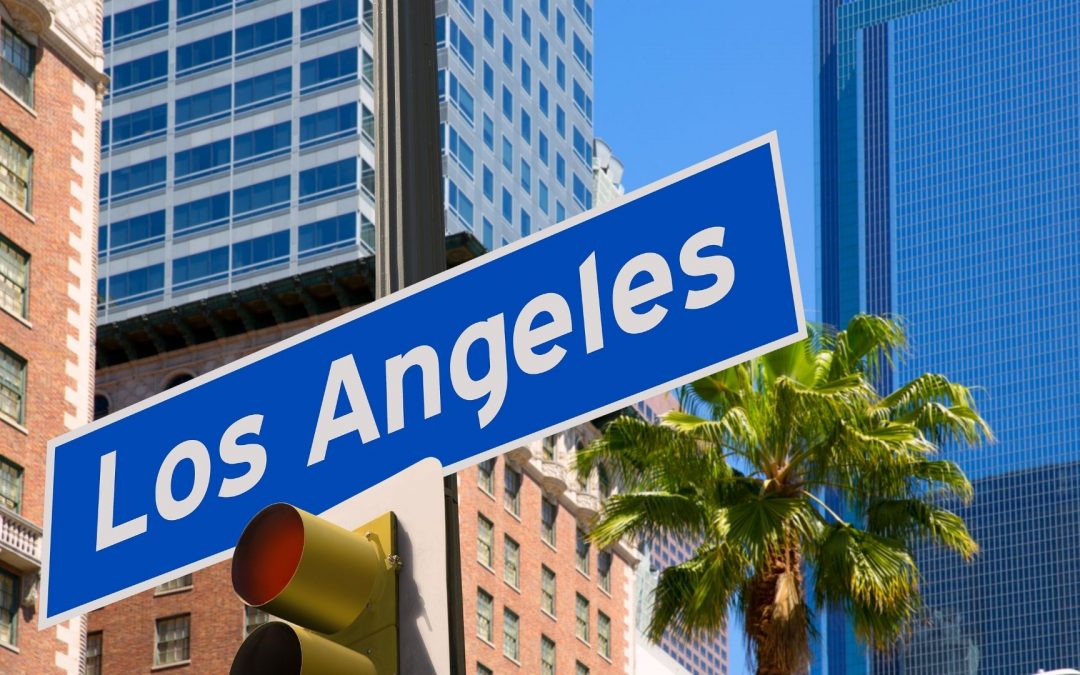 The City of Los Angeles

Los Angeles grew as the movie capital of the world. For a long time, more movies were made here than in any other city.

Los Angeles lies along the Pacific Ocean in southern California. It sprawls over a large area between the San Gabriel Mountains and the ocean. People depend on cars to get around this large area. As a result, the city suffers from air pollution and traffic jams.

Early in the 1900s, the movie industry moved from New York City to Los Angeles. The mild southern California weather permitted moviemaking year-round. By the 1930s, companies in Los Angeles produced 400 movies a year. That’s more than one a day.

Most of the movie studios were located in a part of Los Angeles called Hollywood. In 1923, a real estate agency put up a huge sign on a hilltop to advertise the area. The letters of the sign, which spell Hollywood, stand 45 feet (14 meters) tall. The Hollywood sign is a city landmark.

Movies are big business in Los Angeles. But there is a lot more going on than moviemaking. The city’s seaport is one of the busiest in the United States. Los Angeles is a leading producer of aircraft and military equipment. It is also an important banking center.

Los Angeles has many museums. The Getty Center is an art museum that offers spectacular views of the city from a hilltop near the Pacific Ocean. Other art museums include the Los Angeles County Museum of Art and the Museum of Contemporary Art.

A group of colorful towers rise in an area of the city called Watts. They are made of steel rods and wire decorated with shells and bits of pottery and broken glass. An Italian immigrant built the Watts Towers in his spare time over 30 years.

Fossils have been found in the heart of Los Angeles. Here, saber-toothed cats, huge mammoths, giant ground sloths, and other Ice Age animals once roamed. The fossil remains of these animals were buried and preserved in asphalt. Black asphalt, mistakenly called tar, oozed up from the ground to form the La Brea Tar Pits in central Los Angeles.

Scientists think the animals came to drink water that collected on top of the asphalt. While drinking, the animals got trapped in the sticky substance and died. During the 1900s, scientists discovered the fossil bones of the animals. The fossils are now exhibited at the Page Museum of La Brea Discoveries.

CITY OF MANY ORIGINS

Los Angeles is home to many people from Korea, China, Japan, Vietnam, and other places around the globe. Nearly half of the city’s people are Hispanic. Most of the Hispanics are of Mexican ancestry. More Mexicans live in Los Angeles than in any other city except Mexico City.

Los Angeles began in 1781 as a Mexican settlement. Its original Spanish name was a mouthful. It was El Pueblo de Nuestra Señora Reina de Los Angeles del Río de Porciúncula. That means the Town of Our Lady Queen of the Angels of the River Porciúncula.

The name was later shortened to Los Angeles. It means the angels. Today, people shorten the city’s name even more, to L.A.

Los Angeles grew dramatically after railroads linked it to the Midwest and Eastern United States. Between 1880 and 1920, the population jumped from 11,000 to 1 million people. In 1970, California became the U.S. state with the largest population. In 1982, Los Angeles surpassed Chicago to become the second largest U.S. city. Los Angeles is still growing.