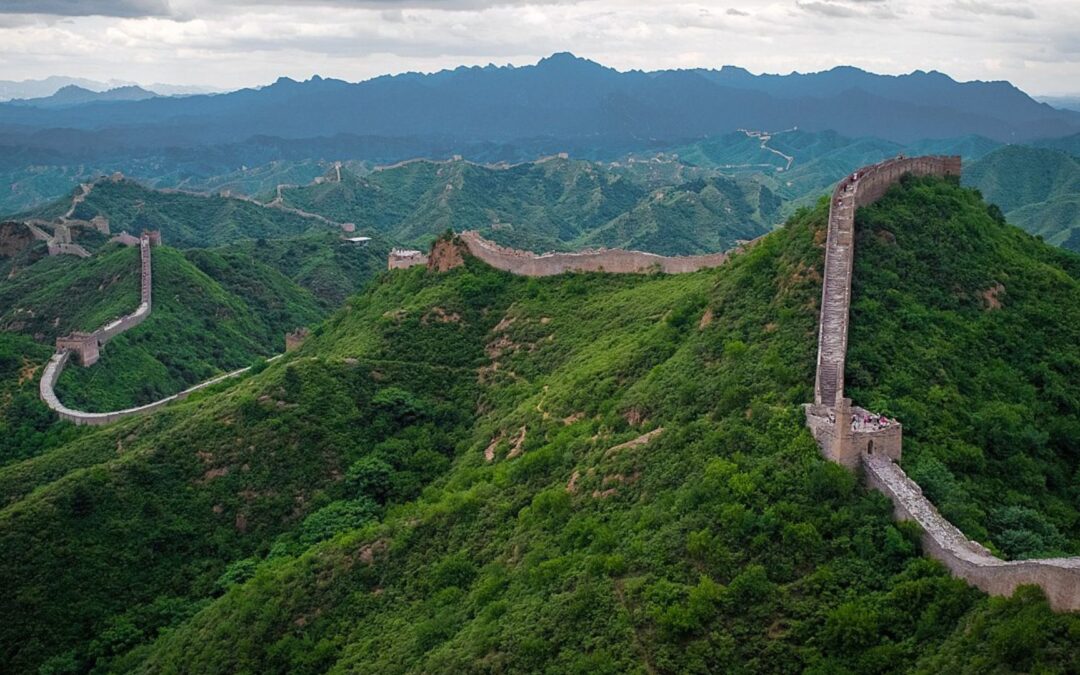 Imagine a huge wall stretching for thousands of miles across the land. The wall winds through hills, climbs mountains, and crosses deserts. If you visit China you can see a wall like this. The Great Wall of China, as it is known, is the longest structure ever built.

The Great Wall of China zigzags across parts of northern China. It was built section by section over centuries. In fact, there are many gaps between the sections, so the Great Wall isn’t a single, solid wall. But if all the sections are measured, the wall is about 4,000 miles (6,400 kilometers) long!

WHY WAS THE GREAT WALL BUILT?

Since ancient times, Chinese people have built walls to protect their borders. Some walls were built between parts of China that were fighting each other. Other walls protected China from outside invaders.

More than 2,000 years ago, the first emperor of China built a long wall to defend the northern border. The emperor, Qin Shi Huangdi, thought of connecting older existing walls with sections of a new wall. The wall he built is considered China’s first Great Wall.

By the late 1400s, much of the old wall had fallen into ruin. The Ming dynasty, a group that ruled China, decided to build a new wall. The Ming rulers wanted to keep China safe from the Mongols, who had a powerful army. They also wanted to move part of the wall farther south. There it could be built to form a long defensive ring around Beijing, the capital city.

HOW WAS THE GREAT WALL BUILT?

At first, builders used the same construction methods that were used to make the old wall. They packed soil between heavy wood frames. But by the 1500s, the Ming rulers had decided to make parts of the wall much stronger. They ordered their builders to make the wall’s foundation from granite blocks. The sides were built from stone or brick.

Workers built watchtowers into the wall so that soldiers would see Mongol attackers coming. A soldier who spotted the enemy could use a warning signal, such as a torch, to alert a soldier in the next tower. Such signals could be relayed quickly from one tower to the next.

The wall is biggest and strongest near Beijing. There, the wall is about 25 feet (7.5 meters) high and 30 feet (9 meters) thick. The top of the wall is paved with brick, forming a road. The road is wide enough to hold ten soldiers marching side by side.

Construction on the wall continued until the mid-1600s, when the Ming dynasty was overthrown. By that time, it was the longest structure ever built anywhere on Earth.

For centuries, the Great Wall slowly fell apart. Local farmers and villagers used the wall as a source of building materials. Some sections of it were even torn down entirely.

In the 1980s, the government of China began to repair the wall. A few sections were completely rebuilt. Today, the Great Wall is one of China’s most popular tourist sites. Historians study the wall to learn about China’s past.