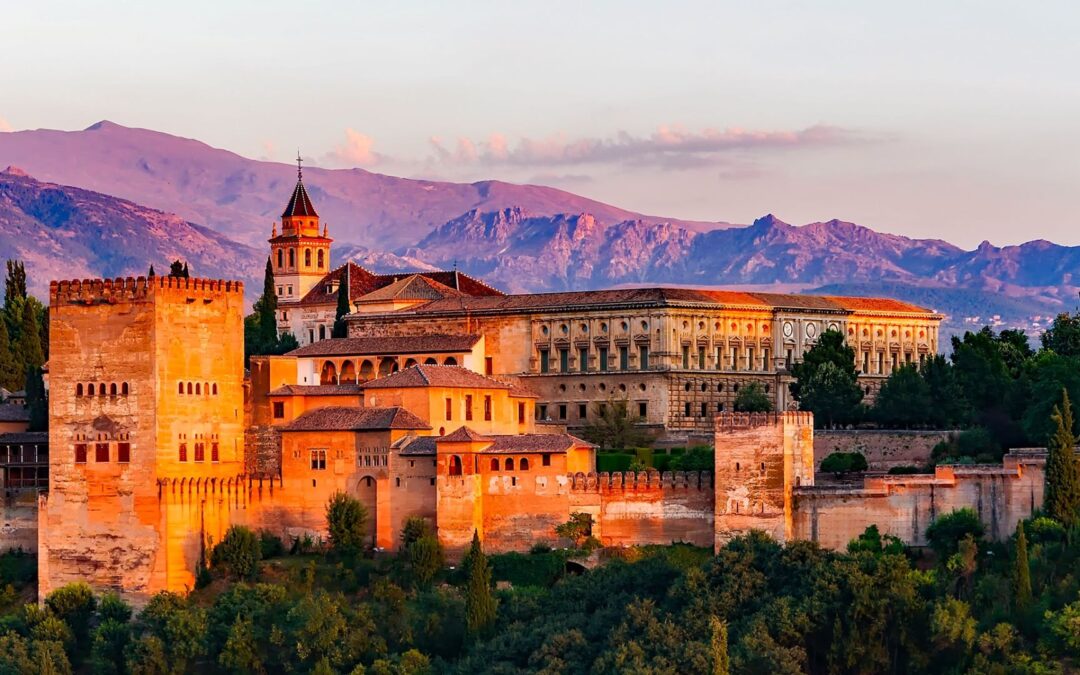 Spain is on a peninsula, a piece of land that juts into water. It’s called the Iberian Peninsula, and it lies between the Atlantic Ocean and Mediterranean Sea. Spain covers most of the peninsula, apart from a small area occupied by the country of Portugal to the west.

The steep Pyrenees Mountains cross the neck of the peninsula. For centuries, the Pyrenees isolated Spain from its European neighbors to the north.

In the south, Spain almost touches northern Africa. Only a narrow strip of water called the Strait of Gibraltar separates Spain from the African continent. For this reason, African influences are an important part of Spain’s history.

Spain has numerous islands, too. They include the Balearic Islands in the Mediterranean Sea and the Canary Islands in the Atlantic Ocean off the coast of Africa.

A huge, rocky plateau called the Meseta Central rises in central Spain. It’s a high, mostly treeless region that covers more than half the country. The best farmland lies along a narrow coastal plain in the north. Even here, rocky ridges come right to the ocean. They cut the plain into short strips.

Spain has sunny weather and a dry climate. Spanish farmers herd animals such as sheep and cattle. They grow crops such as olives, grapes, and almonds. Spain is the world’s biggest producer of olives. They are picked for eating and used to make olive oil. Spain also grows plenty of cork oak trees. Cork is cut from the bark of this tree.

The sunny weather, sandy Mediterranean beaches, and scenic islands make Spain a playground for visitors. In fact, Spain is one of the world’s most popular tourist destinations.

Spain’s capital and largest city is Madrid. It stands near the very heart of the Iberian Peninsula. Madrid is a modern city that’s home to about 3 million people. It’s also filled with famous old landmarks, such as the Plaza Mayor, a huge public square lined with impressive buildings.

Barcelona, on the northeast coast, is Spain’s second largest city. Barcelona is Spain’s chief port and main industrial center. The city’s most famous landmark is the Church of the Holy Family. The ornate spires of the cathedral rise more than 328 feet (100 meters).

Perhaps no sport is more Spanish than bullfighting. The Spanish consider it an art form. Bullfighters, called matadors, seek to show bravery and dignity in the bullfighting ring. The danger and excitement of the sport inspired American author Ernest Hemingway to write about bullfighting in two books, The Sun Also Rises and Death in the Afternoon.

Every summer, Spaniards celebrate the beginning of bullfighting season with a week of festivities. In the city of Pamplona, celebrations include the running of the bulls. Each morning, bulls are set loose in the city streets. Those who dare get in front of the bulls and try to race ahead of them. Sometimes, people are wounded or even killed by the bulls.

In ad 711, Muslim invaders from Africa captured Spain. The Muslims had conquered their way across North Africa before invading Spain. Spain remained a Muslim-ruled land for hundreds of years.

Afterward, Spain became a Catholic nation. In fact, the Spanish government set up a court called the Spanish Inquisition. This court caught and punished people who refused to convert to Catholicism.

Ferdinand and Isabella made Spain a great power. In 1492, Isabella sponsored a voyage led by a sailor named Christopher Columbus. Columbus was seeking a westward route to Asia. Instead of finding Asia, Columbus found the Americas. It proved to be a turning point in Spanish history.

Spain got to the Americas ahead of most other European countries. It quickly built an empire in parts of North and South America. Spanish ships carted huge amounts of silver and gold back to Europe. Spain became Europe’s richest country. It ruled a world empire.

Spain used most of its wealth to build military power, including a great navy called the Spanish Armada. When the gold and silver ran out, it had little to fall back on. Spain grew poor and weak. Its colonies broke away.

In 1898, Spain lost a war with the United States. That forced Spain to give up Cuba, Guam, and Puerto Rico, its last holdings in the Americas.

In 1936, a terrible civil war broke out in Spain. It ended with a general named Francisco Franco taking over. This tough dictator executed thousands of people and put thousands more in prison. Franco died in 1975.

After Franco’s death, Spain appointed a king. They chose Juan Carlos I, who was descended from Spain’s last king. But Spain also adopted a new constitution that made the king a symbol rather than the ruler. It gave real power to an elected prime minister. Today, Spain is a vibrant democracy.