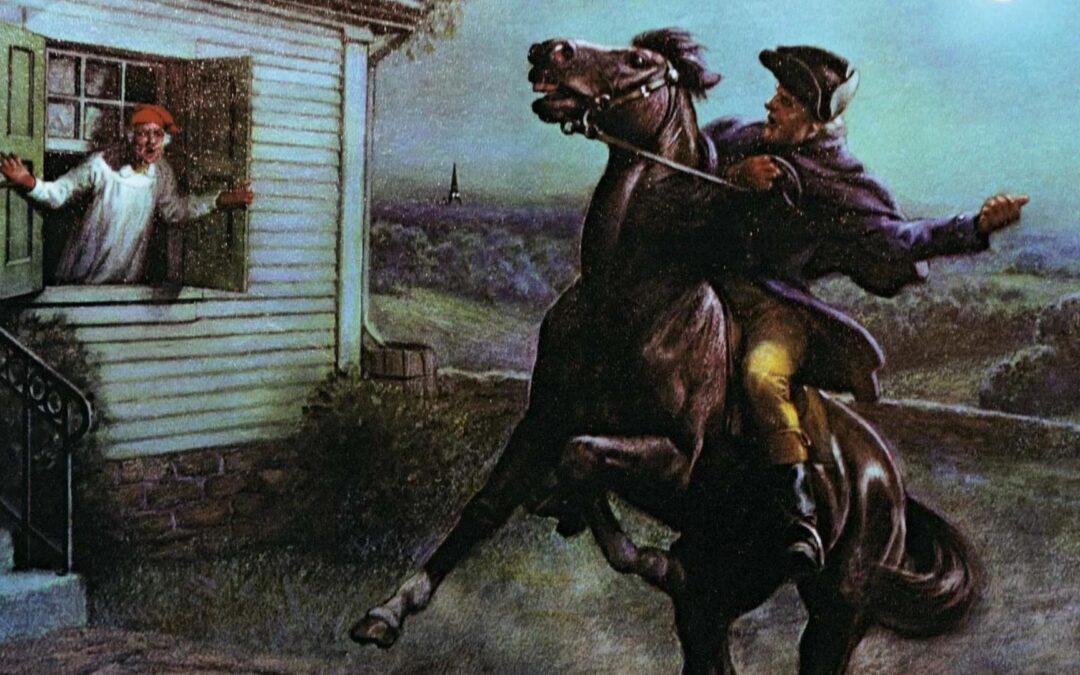 On April 18, 1775, in the dark of night, Paul Revere awoke to pounding on his door. Friends brought news: British troops were on the move!

Revere pulled on his clothes and jumped on a borrowed horse. Along with two other horsemen, he galloped from his home in Boston, Massachusetts, to the nearby town of Lexington. While there, he warned the American leaders John Hancock and Samuel Adams about the approaching British troops.

Revere then raced on to warn the town of Concord, where the Americans had stored guns. British scouts were waiting. They captured Revere and one of the other riders.

But the alarm had already spread. American minutemen (volunteer soldiers) ran from their homes to defend their towns. By morning, they lay waiting for the British troops. The battles of Lexington and Concord became the first battles of the American Revolution.

Paul Revere was born in Boston in 1735. His father was a silversmith. As a young man, he entered his father’s silversmith business.

Revere quickly gained fame as a talented silversmith. His finely made bowls and gleaming tea sets were widely admired. Today, a piece of Revere silver is worth a fortune!

Gifted with his hands, Revere learned to craft many useful things. He built medical instruments, engraved pictures, and even made false teeth.

Revere used his talents as a craftsman to support American liberty. He engraved political cartoons that scorned the British. Many of his cartoons were seen throughout the American colonies. Revere also served as a messenger for some of Boston’s best-known American patriots, including Adams and Hancock.

In 1770, British soldiers fired into a mob, killing five Americans. Revere’s famous engraving of this event, known as the Boston Massacre, whipped up American anger.

On a cold December night in 1773, Revere took part in the Boston Tea Party. Protesting a British tea tax, Americans climbed on board British ships and dumped expensive tea into Boston Harbor.

WHAT DID REVERE DO DURING THE WAR?

During the American Revolution, Revere served in the Massachusetts militia. He also continued his business. He helped make cannons for the army and engraved metal plates for printing money. He also designed the seal (logo) still used by the state of Massachusetts.

After the war, Revere continued as a successful silversmith. An expert metalworker, Revere learned how to roll sheets of copper. He went on to build the first mill in the United States that made sheets of copper. Revere died in Boston in 1818.