Knowledge Plus | What Do You Know About Cheetahs? 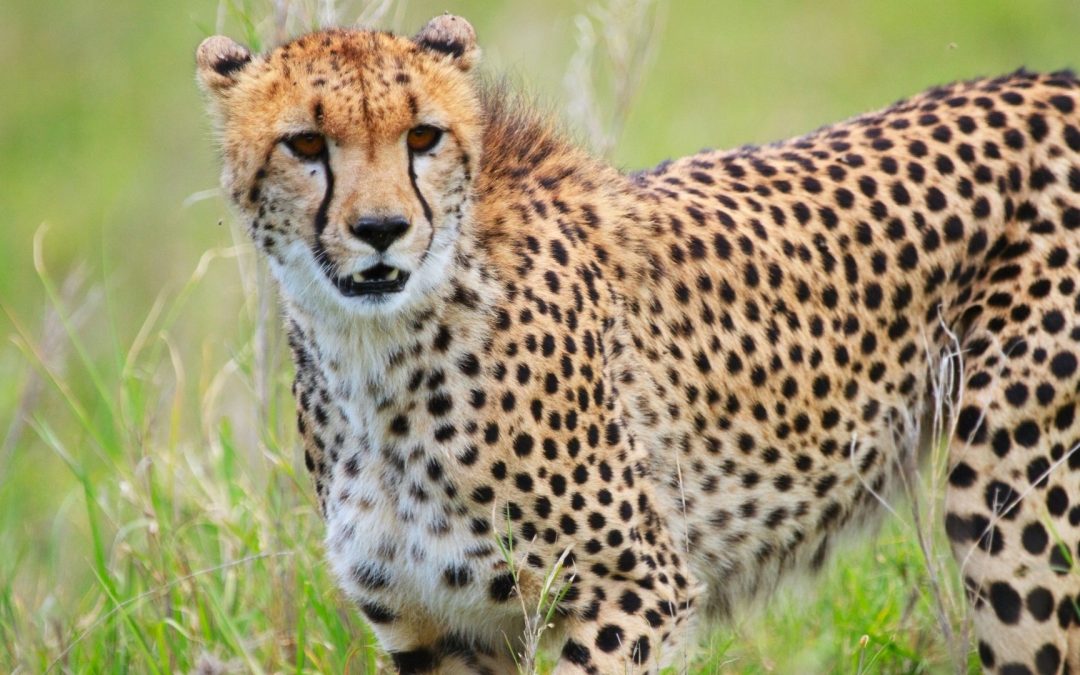 What Do You Know About Cheetahs?

Can you move as fast as a car? Probably not, unless the car is going very slowly. But a cheetah can keep up with a car. Cheetahs can run as fast as 58 miles (93 kilometers) per hour. That’s as fast as a car on the freeway! Cheetahs are probably the fastest animals on Earth.

Cheetahs are big cats, a bit smaller than lions or tigers. Cheetahs have a yellow to pale brown coat covered with black spots. Their coloring helps them hide in bushes and grass. The spots become rings on the cheetah’s long tail. Each cheetah’s tail has a different pattern of rings. Scientists use the tails to tell cheetahs apart.

Cheetahs don’t roar like some big cats. Instead, they make purrs, bleats, barks, and chirps. The chirps can sound a lot like a bird!

WHAT MAKES CHEETAHS SO FAST?

Cheetahs are built for speed. Their bodies are muscular and streamlined. They have long legs and backs that let them take big steps. They have long tails to help them keep their balance and steer at high speeds. They have large hearts and lungs that help them breathe easily during fast runs. In addition, they have ridges on the bottoms of their paws that provide traction, much like the ridges on snow boots that keep you from slipping.

Although cheetahs can reach their top speeds in two or three seconds, they can’t keep it up for long. Cheetahs can’t sweat to cool themselves down, unlike people. If a cheetah doesn’t catch its prey after it runs about 1,000 feet (300 meters)—the length of three soccer fields—it has to give up. Otherwise, its body could get so hot that the cheetah might die.

HOW DO CHEETAHS HUNT?

Cheetahs hunt gazelles, impalas, hares, and young wildebeests. Sometimes, males cooperate with other males to prey on even bigger animals, such as zebras.

Cheetahs don’t rely just on speed to catch dinner. They sneak up on their prey until they are within about 33 feet (10 meters), and then they burst into a sprint. Cheetahs catch the animals they stalk about half the time. Once the prey is caught, cheetahs bite its neck until it can’t breathe anymore.

Sometimes, cheetahs are the victims of theft. Lions or hyenas may bully a cheetah and steal its fresh kill. For this reason, cheetahs hunt during the day, when lions and hyenas like to nap.

HOW DO CHEETAHS LIVE?

Cheetahs live in dry places, such as grasslands. They can go a long time without water. They get much of the water they need from the prey they kill. Cheetahs like places where they can see for a long distance, so they can find more prey. Cheetahs also need bushes and shrubs to hide behind when they hunt.

Mother cheetahs give birth to four to eight cubs at a time. The cubs are born blind and helpless. They stay hidden in their den for about eight weeks while their mother hunts.

A mother cheetah may be away from her cubs for a day or two. While she is gone, jaguars and wild dogs often prey on the cubs. Most young cheetahs don’t live to be three months old!

Cheetah cubs learn to hunt by following their mothers. The cubs leave their family when they are from 13 to 24 months old, even though they may not be very good hunters yet. Many cheetahs die at this time. If cheetahs make it to adulthood, they can live to 12 years of age in the wild and 16 years of age in zoos.

The number of cheetahs in the world has been getting smaller for 100 years. Zoos around the world are trying to breed cheetahs.