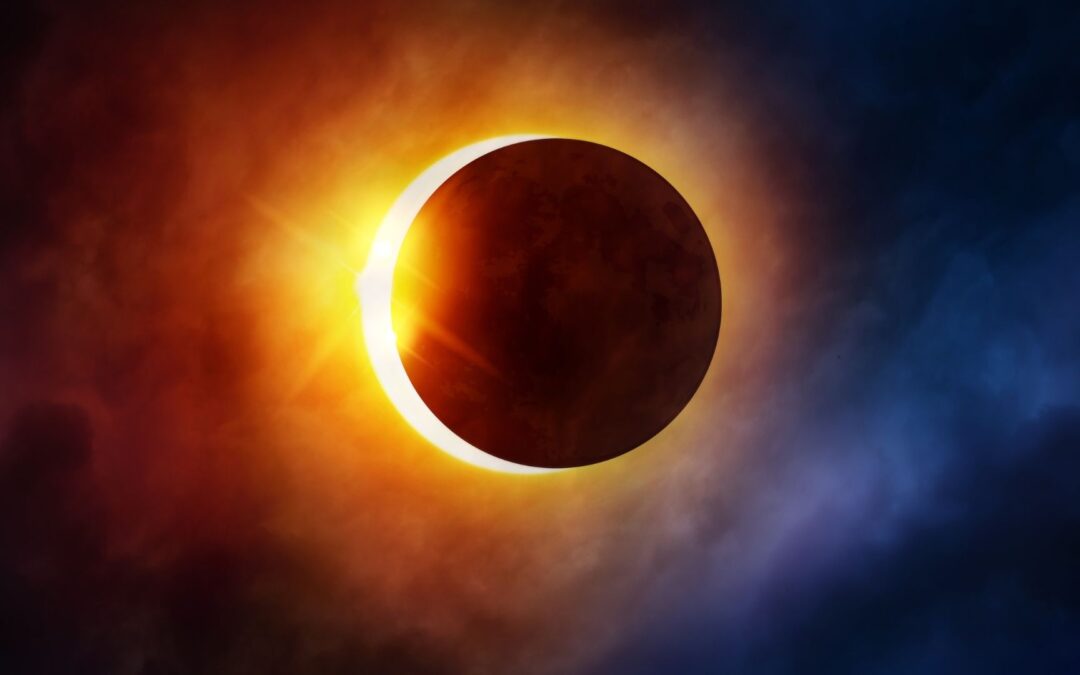 ECLIPSES OF THE SUN

An eclipse of the Sun is also called a solar eclipse. The Moon orbits, or goes around, the Earth. As the Moon orbits, it sometimes gets directly between Earth and the Sun. When this happens, the Moon casts its shadow on Earth. The Moon’s shadow covers only a small part of Earth, not the entire planet. You can see the eclipse only if you happen to be in the part of Earth that gets covered.

There are three kinds of solar eclipses. Sometimes the Moon appears to block out the whole Sun. This is called a total solar eclipse. A bright ring, or halo, appears around the dark disk of the Moon during a total eclipse. The Sun’s corona—the glowing hot gases that surround the Sun—produces this halo.

The Moon is not always the same distance from Earth, because its orbit is not a perfect circle. Sometimes an eclipse happens while the Moon is farther away from Earth than usual. The faraway Moon looks small. It casts a smaller shadow on Earth that blocks out only the center of the Sun. This is called an annular eclipse.

It is very dangerous to look at the Sun, even during an eclipse. Looking at the bright light of the Sun can injure your eyes.

ECLIPSES OF THE MOON

Earth can cause a different kind of eclipse, called an eclipse of the Moon or a lunar eclipse. Lunar eclipses happen when Earth gets directly between the Sun and the Moon. Earth casts a shadow on the Moon. You can see Earth’s shadow moving across the Moon during a lunar eclipse.

HOW OFTEN DO ECLIPSES HAPPEN?

Eclipses are quite common. During the 20th century, there were 228 solar eclipses. There were 147 lunar eclipses. However, you cannot see all eclipses from every place on Earth. You can only see an eclipse from a place on Earth that lines up just right with the Moon and the Sun. Wherever you live, there may only be one eclipse every few years.

Astronomers are scientists who study things in space. They know exactly when and where there will be an eclipse. They use math to figure out when eclipses will happen.