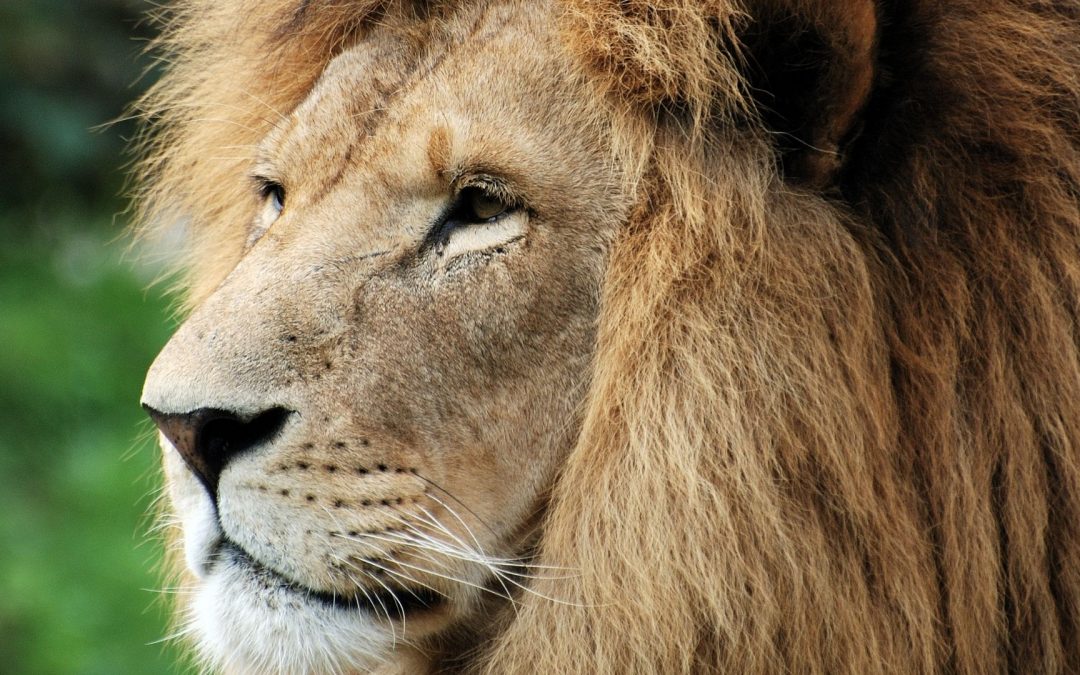 What if you could yell to a friend who lived several miles away—and your friend could hear you? That is how loud a lion can roar! No wonder this mighty animal is called the king of beasts.

Lions are big cats. Along with tigers, lions are the world’s biggest and strongest cats. There are two kinds of lions, African and Asian lions. Lions live on grassy plains, savannas, and dry woodlands in Africa and India. They do not like to live in jungles and thick forests.

Lions have huge shoulders, strong front legs, and powerful jaws. Their paws have long, sharp claws. To keep its claws sharp, a lion draws them in when not in use.

Male lions are large and powerful. They weigh from 330 to 550 pounds (150 to 250 kilograms) and stand about 4 feet (about 1.2 meters) tall at the shoulder. Female lions are smaller than males.

Male lions grow a kind of fur collar called a mane. The mane grows around their head, neck, and shoulders. The mane becomes darker and fuller as the lion gets older. It makes a lion appear larger and fiercer to opponents.

Cubs, or baby lions, have fur dotted with many spots. The spots help them hide from enemies in brush and clumps of grass. The spots fade as the cubs grow up.

WHAT IS A PRIDE?

Lions live in groups called prides. There are as many as 35 males, females, and cubs in a pride. All the females in a pride are related. The females in the pride hunt together and care for cubs together.

The males in a pride are not always related. Males join a female pride to mate and produce cubs. Males do not help care for cubs. Males patrol their territory. They try to keep rival males away from their pride.

When female cubs grow up they stay with the pride. Males must leave the pride.

Female lions do most of the hunting. Lions like to hunt at night. They hunt alone or in groups. A lion alone often hunts smaller prey such as hares or warthogs. The lion slowly and silently stalks the animal. If the prey sees the lion and runs, the lion usually gives up. When the lion gets close enough, it suddenly runs for the prey. It grabs the animal with its teeth and claws, pulls it to the ground, and kills it.

Groups of lions hunt large prey, such as buffalo, zebras, and even giraffes. A group of lions may surround an animal to trap it. Some lions may drive the animal toward waiting lions. Two or more lions grab and bring down the animal. Lions also steal prey killed by other animals, such as hyenas.

Lions do not have an easy life in the wild. They starve when they cannot find food. They get injured or killed while hunting or fighting with each other. They suffer from diseases.

Males have bloody fights. Younger males challenge older males for leadership of a pride. Sometimes they drive the older males away.

Females fight with the new males. The new males try to kill cubs that were fathered by the other males. Females are too small to fight male lions one on one. But the pride females may join together to save their cubs.

Male lions only live about 10 years in the wild. Females live a little longer. In zoos where they are cared for and cannot fight, lions may live as long as 25 years.

Lions once roamed all over Europe, Africa, the Middle East, and Asia. People have hunted and killed lions since ancient times. They have also hunted the animals lions need for food. In many places, people have destroyed the areas where lions lived by building towns, roads, and farms.

There are about 100,000 lions left in the world. Only a few hundred Asian lions live in India. Most lions live on game reserves in Africa. Thousands of lions also live in zoos and circuses around the world.