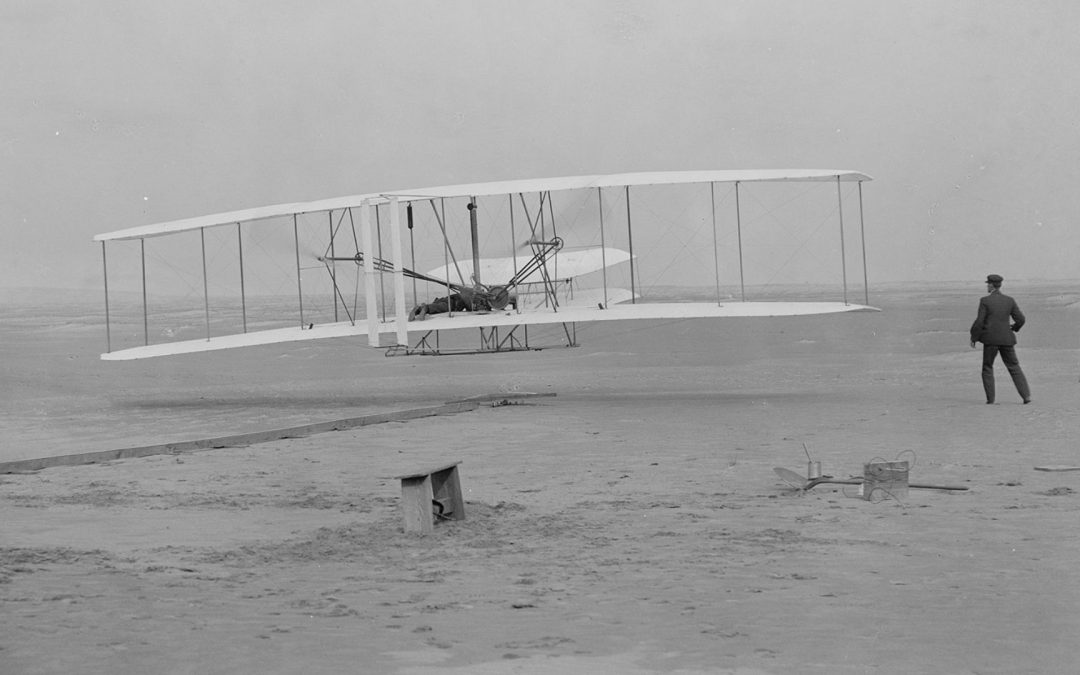 Learn about the Wright Brothers in this podcast episode and use the included PDF to practice your English.

It lasted only 12 seconds, but those 12 seconds changed history. On December 17, 1903, two brothers named Orville and Wilbur Wright made the first airplane flight.

Wilbur Wright was born in Millville, Indiana, in 1867. Orville was born in Dayton, Ohio, in 1871. Neither boy graduated from high school, but mechanical things fascinated the young Wright brothers. They taught themselves math and engineering. In 1892, the brothers opened a shop in Dayton where they designed and built bicycles.

WHAT SPARKED THEIR INTEREST IN FLYING?

The Wrights became interested in the work of German inventor Otto Lilienthal. Lilienthal designed and flew on gliders. Lilienthal died in a glider crash in 1896. The brothers decided to build a flying machine. They also were determined to learn how to control flight safely. They began experimenting with large kites.

STARTING OUT WITH KITES AND GLIDERS

The Wrights’ kites had controls that let them warp (twist) the ends of the wings. This warping helped them to make the kite more stable and to adjust its direction of flight. In 1900, the brothers built a huge kite with wings that stretched 17 feet (5 meters). The kite was large enough to carry a person.

They tested their flights near the town of Kitty Hawk on the coast of North Carolina. This location was ideal. Steady winds from the ocean lifted the kite into the air. The kite crashed on sand dunes, which was safer than crashing into trees or solid ground. Wilbur actually flew on the kite for a few seconds.

Next, the Wrights built a wooden glider. In 1901, they experimented on the larger sand dunes at Kill Devil Hills. The glider had arched wings, a design that made the glider more stable. It also had hand controls that worked a flap on the tail to control up-and-down movements. But the brothers needed a design with even more stability and control.

The Wrights designed and built a wind tunnel, a wooden box six feet (2 meters) long with a fan blowing in one end. They tested models of different wing shapes in the wind that blew through the tunnel. They also tried new ways to control their gliders. In 1902, the Wrights built a new glider with a wingspan of 32 feet (10 meters). They added a moveable rudder to the back of the glider to help steer. Their tests were so successful that they decided to build an engine-powered flying machine.

The brothers built their own small engine. They also built a propeller. Their plane weighed 750 pounds (340 kilograms). Its wings stretched 40 feet (12 meters) across. On December 17, 1903, Orville made the first successful flight. He stayed in the air for 12 seconds. Wilbur also made flights that day. In the last flight Wilbur stayed in the air for 59 seconds and traveled 852 feet (260 meters)!

HOW DID THE WRIGHTS PROMOTE FLYING?

The brothers continued perfecting their plane. They practiced piloting machines with more powerful engines. These planes made longer flights and sharper turns.

The Wrights gave public demonstrations of flying in both the United States and Europe. Orders for planes rolled in from governments around the world. In 1909, the brothers formed the Wright Company to build airplanes. By that time they’d produced a plane stable enough for a 20-mile (32-kilometer) flight.

Wilbur died of typhoid fever in 1912. Orville sold the company in 1915 and spent time doing more research. By 1918, other companies had begun to build airplanes. Orville won many awards for his work before his death in 1948.