Do You Know | Mozart and Beethoven 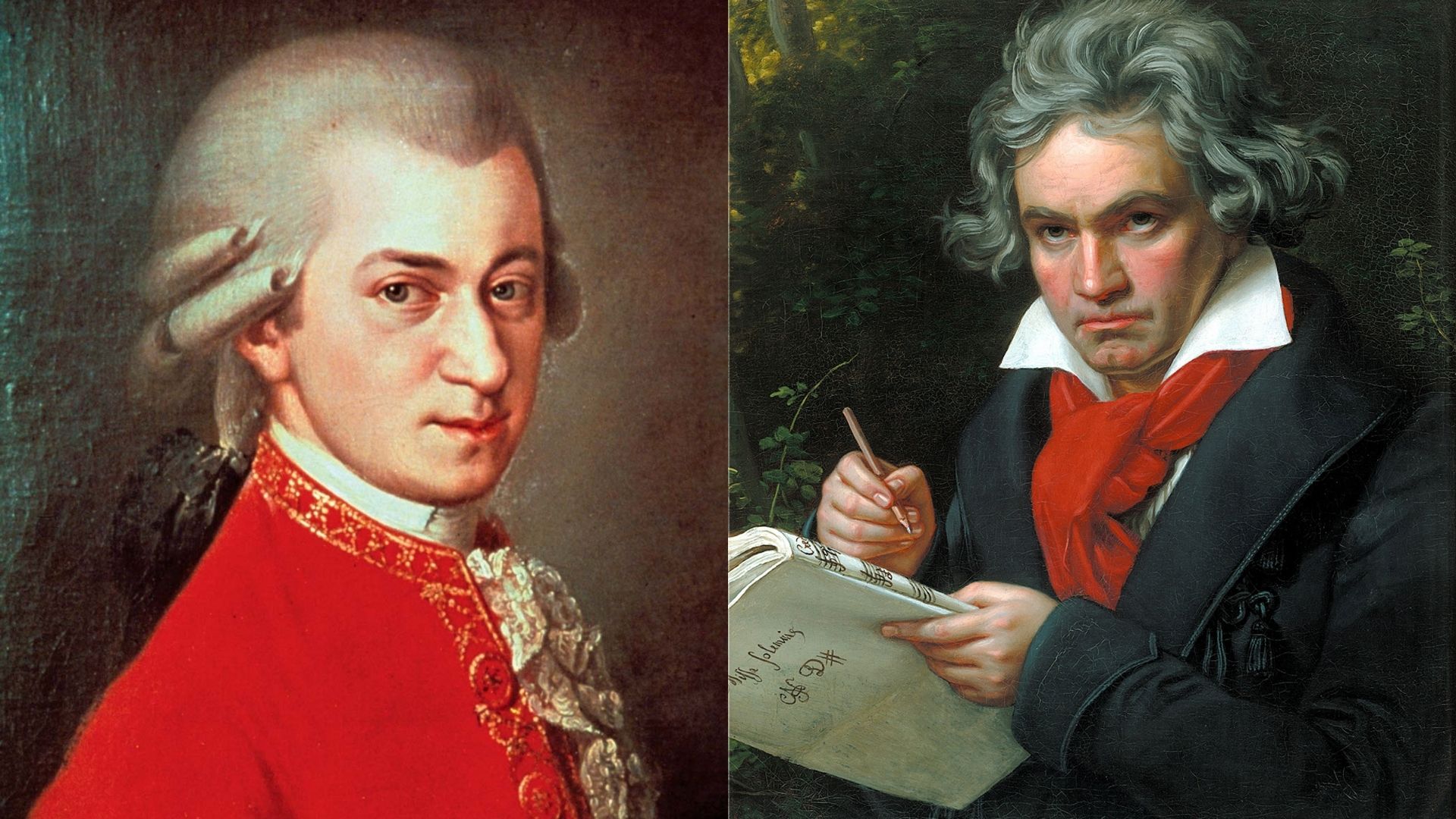 Do You Know | Mozart and Beethoven

Learn about two of the greatest composers of all time, Wolfgang Amadeus Mozart and Ludwig Van Beethoven in this new Do You Know episode from English Plus Podcast.

Episode 348 Do You Know Mozart and Beethoven

Wolfgang Amadeus Mozart wrote an amazing amount of music, especially for someone who died so young. He was only 35 when he died, yet he composed more than 600 pieces of music. Music lovers place Mozart among the greatest composers who ever lived.

A STAR AS A CHILD

Mozart was born in Salzburg, Austria, in 1756. His father started training him so early that by age six Mozart was performing for the kings and queens of Europe. The young child absorbed the music written at the time on his visits to these royal courts. By eight, Mozart was writing his own symphonies.

People loved Mozart’s lively, often humorous music. Even Austrian composer Joseph Haydn, the dominant figure in music then, was a fan. Mozart was famous, successful, and in great demand. His best-known works include the serenade Eine kleine Nachtmusik, the operas The Marriage of Figaro and The Magic Flute, many outstanding piano concertos, and the Requiem Mass in D Minor.

Mozart often wrote music for people who paid him, but he was happiest working for himself. An archbishop who employed Mozart had little interest in music and once dismissed him with a kick in the rear. Most famously, the Austrian emperor accused Mozart of writing music that was too difficult because it had “too many notes.”

Mozart was always troubled by problems with money. To support his family, he gave music lessons and composed constantly. He was working feverishly when he died at 35 years of age in 1791. The cause of his death is not known, and he was buried as a poor person in an unmarked grave.

Mozart completed more than 600 works in all: 41 symphonies, 27 piano concertos, 23 string quartets, 17 piano sonatas, 7 major operas, and numerous works for voice and other instruments. He had a great gift for creating melodies. Some were charming and amusing. Others were sad and intense. He was able to communicate feelings through his music.

Mozart took the styles of Haydn and others and developed his own style, influencing many composers who came after him. He raised the concerto and string quartet to new levels of brilliance. Mozart is considered one of the world’s great musical geniuses.

Ludwig van Beethoven may sound like a stuffy name. But this German composer was a star in his time, and he had many fans. He broke the rules for writing music. Most people consider Beethoven one of the greatest musicians of all time.

Beethoven was born in Bonn, Germany, in 1770. His childhood was unhappy. His father drank too much. Beethoven’s musical talent was obvious from childhood. He quickly became a talented performer on the piano. In 1792, he moved to Vienna, Austria, to study with Austrian composer Joseph Haydn. Soon Beethoven was playing music that he wrote himself. Many people admired his powerful, dramatic music.

Beethoven was often ill or depressed. He was unable to find a woman who would marry him. Just as he was becoming very successful, he started to lose his hearing. Deafness is the worst fate for a musician. Beethoven’s performing career was over.

Despite Beethoven’s hearing loss, he still wrote music. The music he wrote became even better. His music was richly expressive and revealed feelings such as joy and sadness. He created one bold masterpiece after another. Besides piano music, Beethoven wrote string quartets (pieces for four stringed instruments) and other kinds of chamber music. Chamber music is written for small groups, and people can play it in their homes or in small halls. Beethoven also wrote songs, two masses, an opera, and nine outstanding symphonies.

Crowds loved him and adored his music. Beethoven was famous, although not happy. In 1827, he got pneumonia and died in Vienna.

Beethoven studied works by Haydn, German composer Johann Sebastian Bach, and Austrian composer Wolfgang Amadeus Mozart. Then he broke their rules and made music that was like no one else’s. It was emotional and challenging. Beethoven wanted his music to express ideas as well as emotions. He wanted it to praise freedom and equality and other high ideals.