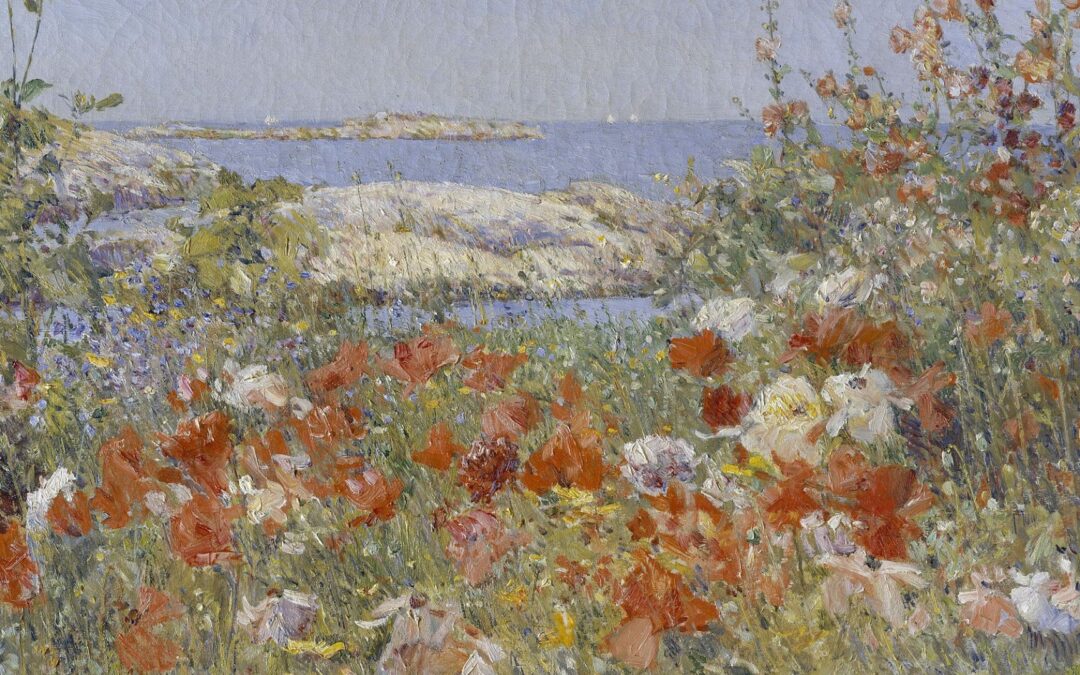 The Isles of Shoals, a bleak cluster of rocks just off the Maine-New Hampshire coast, are best known today as the site of one of America’s notable artistic collaborations. It was here on Appledore Island that Celia Thaxter nurtured a wild profusion of blooms and from them distilled a lifetime of practical advice in her book, An Island Garden. While Thaxter’s evocations of the joys and frustrations of cultivation set a standard for American garden writing that may never be surpassed, Childe Hassam’s illustrations of the garden’s evanescent beauty are among America’s finest contributions to impressionism.

When Hassam met Celia Thaxter in the early 1880s, Thaxter was already a well-known poet, and her book about growing up as the lighthouse-keeper’s daughter on the Isles of Shoals was a bestseller. Twenty-four years Hassam’s senior, she enrolled in a watercolor class he was teaching in Boston. Their friendship blossomed when he and his wife gravitated to her family’s hotel on Appledore. Thaxter became the young artist’s devoted friend, muse, and mentor. At Thaxter’s suggestion, he dropped his first name, Frederick, in favor of his more exotic middle name, Childe.

Childe Hassam, inspired by his father’s collection of art and antiques, began painting at an early age. By the time he was twenty, his engravings and illustrations were appearing in leading publications. In 1883, determined to become a serious painter, he went on a European tour. In England, he responded to the masterful rendering of atmosphere in the landscapes of J. M. W. Turner, and in Paris, he embraced the sense of sunshine and fresh air portrayed by the impressionists. Whether producing somber canvases of rainy Boston streets or animated oils of New York’s Union Square, Hassam created a hybrid impressionism, a sort of compromise between the careful drawing he had learned from engraving and the lush, bold feel of the modern French tradition.

Celia Thaxter and Childe Hassam had few American equals in their time. From Thaxter’s accounts of individual plants to her scintillating description of her all-out war against slugs, she captured her garden’s brilliant hues and her island’s wild beauty. In a dazzling series of oils, watercolors, and pastels, Hassam recreated Thaxter’s garden in vivid explosions of color ablaze among green foliage or against the gray rocks and blue skies of the New England summer.

Celia Thaxter died in the summer of 1894, soon after the publication of An Island Garden. Hassam helped carry her to her island grave. Deeply moved by the loss of his friend, he stayed away from Appledore for several years. When he returned, he devoted his artistic attention to the island itself and the surrounding Atlantic. Thaxter’s garden gradually disappeared, preserved only in her words and Hassam’s works of art.