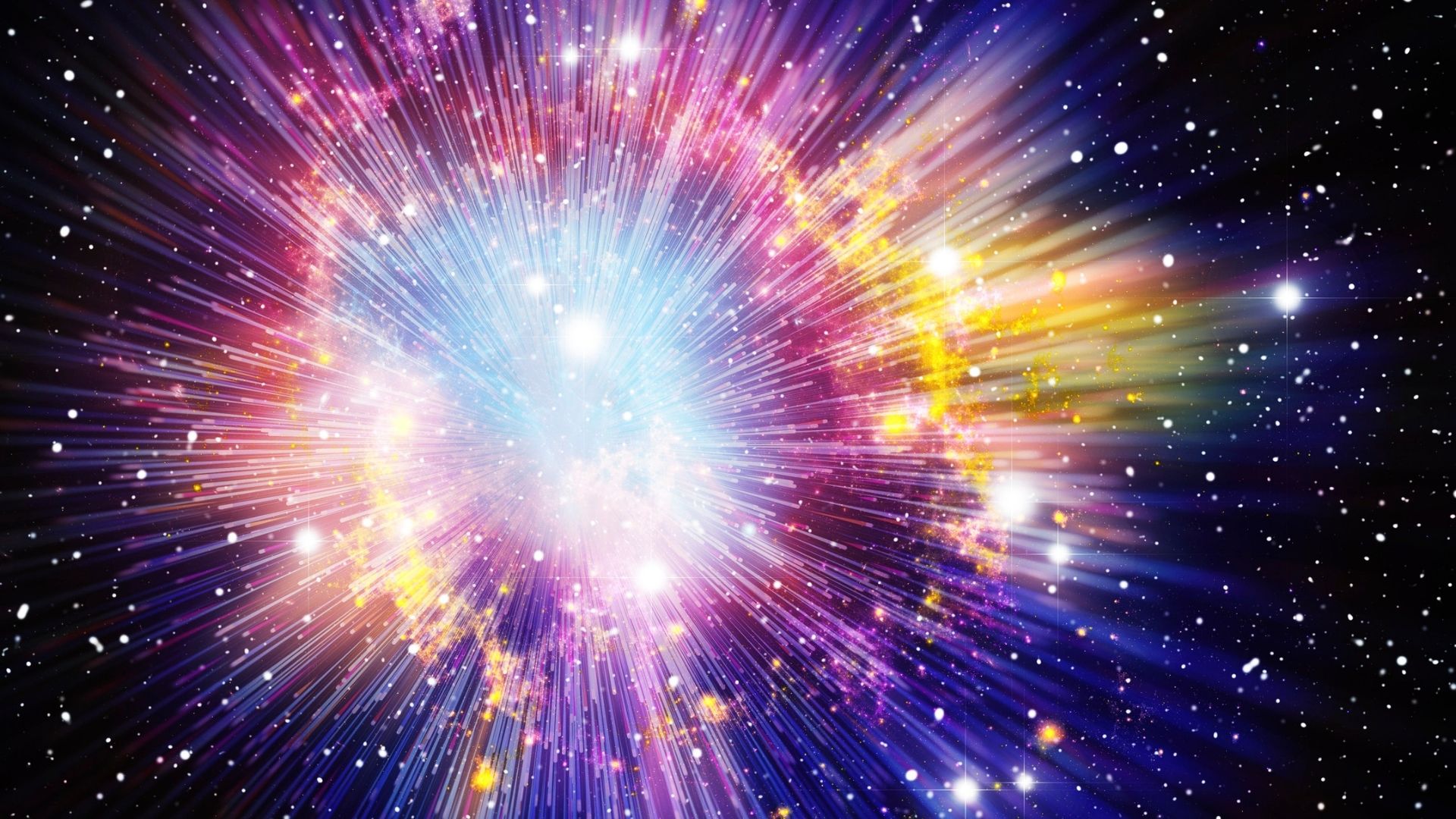 The universe contains everything that exists: Earth, the Sun, the stars, galaxies (collections of billions of stars), and everything else in space. People have wondered how the universe got started for thousands of years. Most scientists now think they have the answer. They think the universe began about 14 billion years ago with a kind of big explosion. They call the explosion the big bang.

WHAT HAPPENED AFTER THE BIG BANG?

No one knows what caused the big bang, but scientists think they know what happened all the way back to the first seconds after the big bang.

The brand new universe was very hot and very small. It blew outwards very fast. In the first three minutes, matter started to form. Hundreds of years later, the universe looked like a big ball of fire.

You can picture the universe as something like a black balloon with white dots painted on it. The black represents space and the white dots are galaxies. Blowing air into the balloon makes it bigger. The spaces between each dot get farther apart as the balloon expands.

As it got bigger, the universe got cooler. Hydrogen gas formed. The gas broke into clumps. The clumps came together to make galaxies and stars. Other kinds of matter formed in the stars. Finally, planets like Earth formed around some stars.

IS THERE PROOF OF A BIG BANG?

The expansion of the universe is evidence for the big bang. American scientist Edwin Hubble studied light coming from galaxies far out in the universe. In 1929, he found that the galaxies were speeding away from Earth and from each other in all directions. Scientists tracked the paths of the galaxies back to their starting place. They saw that all the galaxies must have started from the same place. Packing all that matter into a small area would make a very dense, searing hot ball—the big bang.

Scientists use math to describe how the universe behaves. In the early 1900s, German American scientist Albert Einstein came up with equations that predict an expanding universe. These equations have correctly predicted the motions of stars, planets, and light.

More proof came in the 1990s from a spacecraft called the Cosmic Background Explorer (COBE). COBE saw rays coming from far off in the universe. The rays are left over from the early days of the universe. They could only have been created in a much smaller and hotter universe long ago.

WILL THE UNIVERSE KEEP EXPANDING?

Scientists are not sure what will happen to the universe. They currently think it will keep expanding forever. They even think the expansion is speeding up. But scientists are still studying this question.

VACCINATION “You’ll just feel a little jab.” Ouch! That wasn’t too bad, and it could save your life. Most of us have had “shots” from a needle. These are usually vaccinations, and they are extremely valuable. They help protect us against diseases. VIRUSES Most...

LOBSTERS Can you grow a new body when you get too big for your old one? Of course not. But lobsters can. They keep growing their whole life. As a lobster grows, it often molts. This means that it grows a new shell and casts off its old one. It even regrows any legs or...

GREAT WALL OF CHINA Imagine a huge wall stretching for thousands of miles across the land. The wall winds through hills, climbs mountains, and crosses deserts. If you visit China you can see a wall like this. The Great Wall of China, as it is known, is the longest...

PAUL REVERE On April 18, 1775, in the dark of night, Paul Revere awoke to pounding on his door. Friends brought news: British troops were on the move! Revere pulled on his clothes and jumped on a borrowed horse. Along with two other horsemen, he galloped from his home...

People exercise to keep healthy. They exercise to lose weight or to stay fit. They exercise to make their muscles bigger and stronger. Maybe you play soccer or some other sport for exercise. Getting exercise can be fun and can make you feel good.
Exercise is a big part of staying physically fit. People who are physically fit are alert and full of energy. Exercise can also help people handle stress. Exercise is especially good for children, teens, and older persons.

When you play with friends, who gets to choose the game? Do you all decide together? Do each of you play a part in the decision? If so, you and your friends are a democracy.
Usually, when we speak of a democracy, we mean a country. In a democratic country, the people choose how they will be governed. Most of the time, they do this by electing leaders who run the government.

They called him “the man with a million stories.” People flocked to Marco Polo’s home to hear him tell exciting tales about his travels in distant lands.
Marco Polo won fame for his journeys across Asia. He wrote a book about his travels that became one of the most famous travel guides in history.

Ice cream is a frozen treat that comes in hundreds of flavors. What’s your favorite flavor? Is it vanilla? That’s the most popular flavor by far. Chocolate ranks second in popularity.
Ice cream is especially popular in the United States. In fact, Americans eat more ice cream than people in any other country.