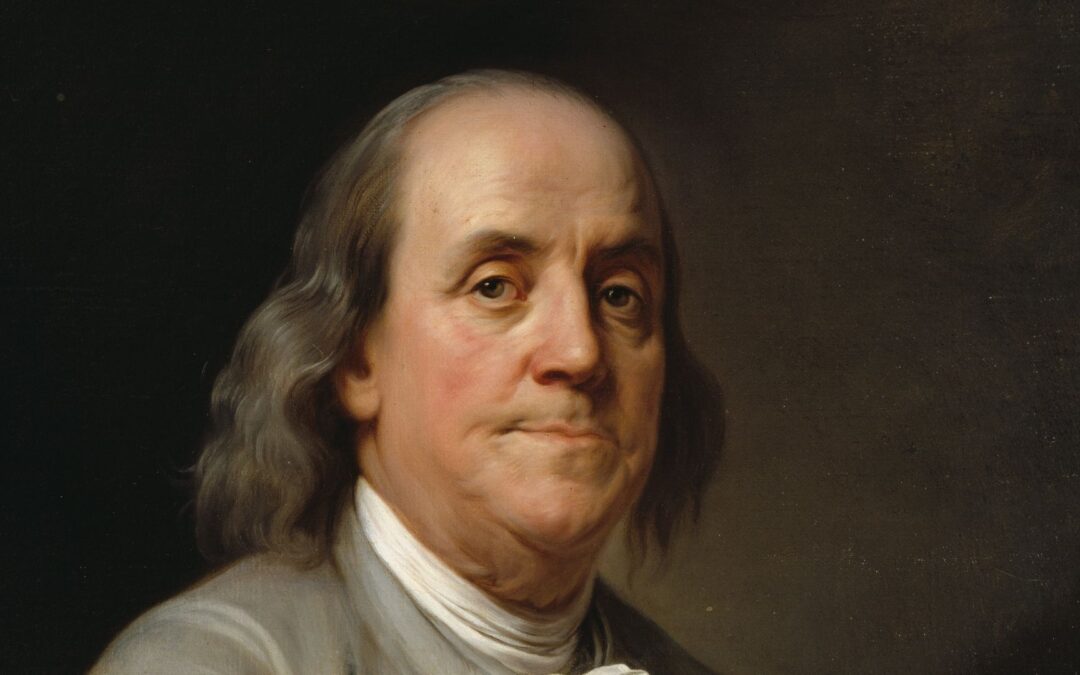 Like many boys at that time, young Ben attended school for only a few years. At age 10 he began training in his father’s candle-making shop. Ben didn’t like the work. When he was 13, his father sent him to work with his older brother James.

James Franklin taught his brother about the printing business. Ben learned to work the heavy printing press. He sold newspapers and even began writing articles. Franklin loved to read and study in his free time, teaching himself math, science, literature, and foreign languages.

In 1722, James Franklin was arrested for criticizing Boston’s leaders in his newspaper. Ben Franklin kept the paper running in his brother’s absence.

In 1724, 18-year-old Ben Franklin sailed to London, England. There he learned all he could about printing and publishing.

Franklin returned to America and settled in Philadelphia, Pennsylvania, in 1726. There he bought a small newspaper, the Pennsylvania Gazette. He married Deborah Read in 1730.

A MAN OF IDEAS

Despite his lack of schooling, Franklin had many ideas on how to improve people’s lives. For example, he organized one of the first public libraries in America. He also started the first fire department and one of the first hospitals in Philadelphia. He busied himself with plans to improve city streets and lighting.

Franklin wrote about improving education, and he helped found a school that became the University of Pennsylvania. In 1732, he began publishing a popular, witty advice book called Poor Richard’s Almanack. Franklin also founded the American Philosophical Society, based in Philadelphia, to discuss the latest scientific theories.

Around 1744, Franklin invented the Franklin stove, which provided more heat while using less fuel. A few years later, he began experimenting with electricity. In 1752, he invented a lightning rod, which keeps lightning from striking buildings and other structures. His scientific ideas and inventions became known in Europe as well as in America.

HOW FRANKLIN SERVED HIS COUNTRY

At the same time, Franklin added politics to his list of achievements. He wrote and published many articles about political issues. In 1754, the colonies sent representatives to a meeting to discuss how they should respond to the French and Indian War. There Franklin proposed his Albany Plan, calling for the colonies to keep their independence while working together on issues that affected all of them. His plan was rejected, but his vision of government would later influence the writing of the United States Constitution.

From 1757 to 1772, Franklin spent most of his time living in London. He represented the colonies in British politics. Franklin explained America’s views of British tax policies, such as the Stamp Act. His efforts helped get the hated Stamp Act repealed by the British government.

Like many Americans, Franklin felt torn between remaining connected to Great Britain and the desire for independence. He understood the growing anger of Americans over British taxes and other actions. Franklin returned to Pennsylvania in May 1775. The American Revolution (1775-1783) had begun a month earlier when fighting broke out in Massachusetts.

In 1775, the 70-year-old Franklin served as a representative at the Second Continental Congress, an early American governing body. He worked on many committees, including the committee that wrote the Declaration of Independence.

FRANKLIN AND THE REVOLUTION

Franklin spent most of the war years in Europe as a diplomat representing the American congress. He helped convince France to loan the Americans money to fund the war effort. Franklin’s humor and intelligence made him very popular in France. Eventually, France joined America in fighting—and defeating—the British.

As the war wound down, Franklin helped negotiate a peace treaty with Great Britain. The treaty, signed in 1783, recognized American independence and ended the long war.

STILL BUSY IN HIS EIGHTIES

Pennsylvania sent Franklin as a delegate to the 1787 convention that planned and wrote the United States Constitution. He was the convention’s oldest delegate.

Franklin remained interested in social causes in his old age. He served as president of the Pennsylvania Abolition Society, an antislavery group. He sent a petition to the United States Congress calling for an end to slavery.

Franklin died on April 17, 1790. His wisdom, wit, and hard work had served his country well.