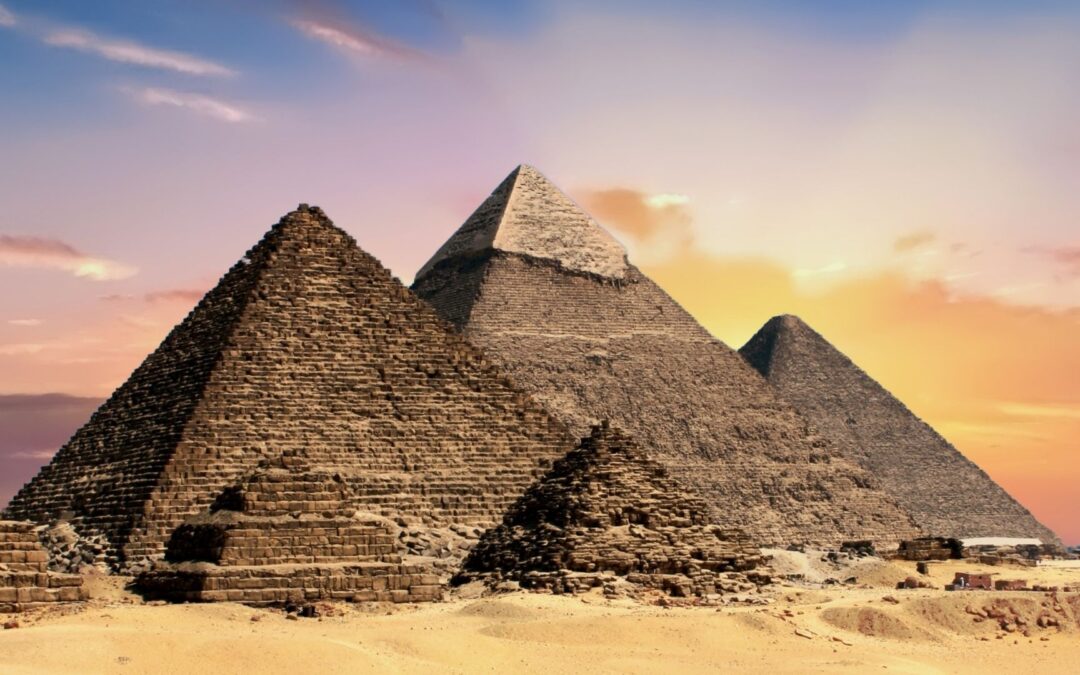 Pyramids and pharaohs, mummies and magic, picture writing on papyrus—ancient Egypt had all this, and much more. Rich, powerful, and peace-loving, this North African kingdom was home to a splendid civilization that lasted 3,000 years, from about 3300 bc to 30 bc.

Ancient Egypt was a vast territory, stretching 700 miles (1,100 kilometers) southward from the Mediterranean Sea. Most of it was hot, dry, and dusty. The Egyptians called it Deshret (red land). But the world’s longest river, the Nile, runs through this desert. Every year, the river flooded the surrounding land. The floods left sticky, smelly mud covering the land along the riverbanks. Egyptians called the riverside area Kemet (black land). This land was very fertile. About 5000 bc, the ancient Egyptians built some of the world’s first farms and villages there.

THE GIFT OF THE NILE

Egypt was sometimes called “the gift of the Nile.” All Egyptian life depended on the river. Farmers dug ditches to bring its water to fields of wheat, grapes, and onions. Rich nobles, town traders, and poor country families all built homes made of sun-dried river mud. Craftspeople shaped clay from the Nile into pottery, and wove cloth from the flax plant that grew on its banks. Families caught fish and river birds for food. Children played in riverside pools, but they had to watch out for killer crocodiles!

Most ancient Egyptian homes had just two or three rooms, with workspace on the roof. Rich people built larger houses, with painted walls, fine furniture, gardens, and pools. In poor families, women wore rough homemade dresses and men wore cloths tied around the hips. But the rich could afford curled wigs, makeup, colored clothes, and jewels. They had servants and slaves to work for them.

Rich or poor, all Egyptians valued family life. They married young and had many children. Families worked together and played together. Egyptian people liked games, stories, music, dancing, and holiday feasts and parades.

The ancient Egyptians believed in magic and many gods. People built little shrines to their favorite gods. They wore amulets (charms), and recited prayers and spells. They also built statues representing gods. The most famous is the Great Sphinx of Giza. This huge statue with the body of a lion and the head of a man still stands today.

The ancient Egyptians had a complex system of writing known as hieroglyphics. This form of writing looks like columns of little pictures. These picture-symbols are called hieroglyphs. Not everyone could read hieroglyphs. Reading and writing was the job of special scholars called scribes.

Scribes wrote in hieroglyphs on papyrus, a kind of paper made from reeds. This was some of the world’s first writing! Pages of poems, songs, stories, math, science, and astronomy have all been preserved.

Egyptian kings were known as pharaohs. Egyptians said the pharaohs were the children of a god. They were links between heaven and Earth. Pharaohs were the chief priests, lawmakers, and army commanders of the kingdom. They gave orders to governors, judges, tax collectors, and soldiers. They made treaties with foreign rulers and controlled trade with other countries. All Egyptians had to pay taxes to them or work on their building projects.

Some of the pharaohs had great pyramids constructed. A pyramid was an enormous stone tomb. Building a pyramid was a tremendous project. Thousands of people worked for many years to construct one. Some of the stone blocks that make up the pyramids weigh more than two elephants!

The ancient Egyptians believed that their bodies must survive for life after death. They had their bodies made into mummies. Mummies were preserved, dried, and wrapped in cloth. Egyptians hoped this would help their spirits survive after they died. Pharaoh mummies were placed in pyramids or great tombs surrounded by treasures to be used in the afterlife. Guides to the world of the dead written in hieroglyphs on papyrus have been found with mummies. Most royal mummies, and the treasures buried with them, were stolen by grave robbers long ago.

LASTING REMINDERS OF THE PAST

Egypt’s rich civilization attracted many invaders. But it survived for thousands of years. In 30 bc, Egypt’s last pharaoh—Queen Cleopatra—killed herself rather than surrender to Roman conquerors. That was 2,000 years ago. But ancient Egypt has not been forgotten. Some mummies were so well preserved that they are still around. Some of them are in museums. And many of ancient Egypt’s greatest monuments, including many pyramids, are still standing. You can visit them!