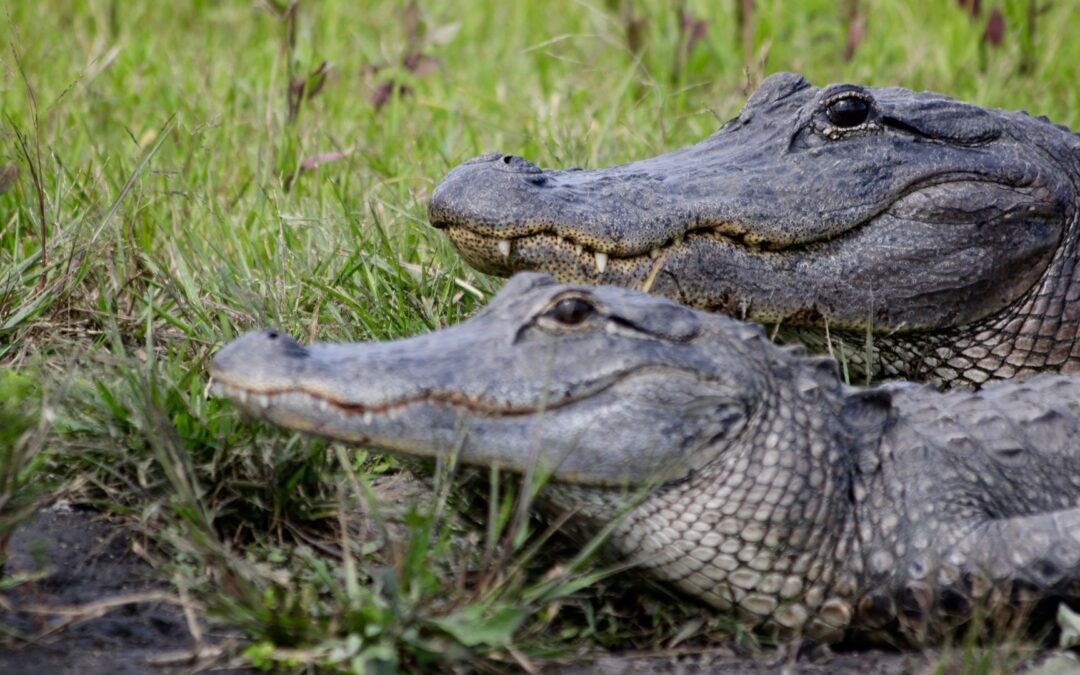 HOW ARE THEY DIFFERENT?

One way to tell the difference between alligators and crocodiles is by looking at their snouts. Alligators and their close relative, the caiman, have broad, rounded snouts. Crocodiles have longer, sharper snouts that are shaped like triangles.

The Indo-Pacific, or saltwater, crocodile is one of the biggest reptiles. It is about 23 feet (7 meters) long and weighs more than 2,000 pounds (more than 1,000 kilograms). The American alligator is smaller. It can grow to 20 feet (6 meters) long.

HOW ARE THEY THE SAME?

All crocodilians are reptiles. They are cold-blooded. This means they must warm up by lying in the sun. They cool off by staying in the shade.

Crocodilians breathe through lungs. They spend most of their time in water but must come to the surface to breathe.

The thick skin of crocodilians is made up of bony plates. These animals have about 30 to 40 teeth in each jaw. The teeth lock together when their jaws are closed—kind of the way a zipper’s teeth fit together.

Alligators and crocodiles float with their bodies almost totally underwater. Only their nostrils, eyes, and part of their backs stick out. They look scary as they silently stalk their prey.

Alligators and crocodiles have long, powerful tails. They sometimes swat prey with their tails. They also use their tails to push prey into deeper water, where it is easier to attack.

Alligators and crocodiles make all kinds of sounds. They hiss softly. They make fearsome roars and bellows. Males roar and bellow loudest during the mating season. Scientists don’t know exactly what the roars mean. Maybe the males are trying to call females. Maybe they are trying to scare other males away.

Alligators and crocodiles use their tails for swimming. They swish their strong tails back and forth.

On land, crocodilians sometimes crawl on their bellies. They can also gallop and walk fast on all four legs, just as many mammals do.

During cold winters, alligators bury themselves in mud. There they can hibernate until spring.

Four species of crocodiles live in the Americas. These crocodiles are found in southern Florida, Cuba and other Caribbean islands, southern Mexico, Central America, and northern South America.

The Indo-Pacific crocodile lives along the seacoasts of India, southern China, Malaysia, and Australia. The swamp crocodile is found in the lakes and rivers of India. The Nile crocodile lives in parts of Africa.

Females crocodilians lay from 20 to 90 eggs. They lay their eggs in nests made of sand, mud, or rotting plant parts. Baby crocodilians hatch from the eggs.

Most female crocodilians watch over their young. Alligator mothers may help the babies break out of the egg. They sometimes carry the newborn alligators in their mouths. They put the babies into the water. Some mothers stay near their young for at least a year. If the young alligator gets in trouble, its mother is there to help.

No one is really sure how long alligators and crocodiles live. Scientists estimate that smaller species can live from 30 to 50 years, while larger crocodilian species can live to be 70 or even 80 years old.

Alligators and crocodiles are threatened by hunting. People hunt them mainly for their eggs and for their skin. Many crocodile species are endangered.